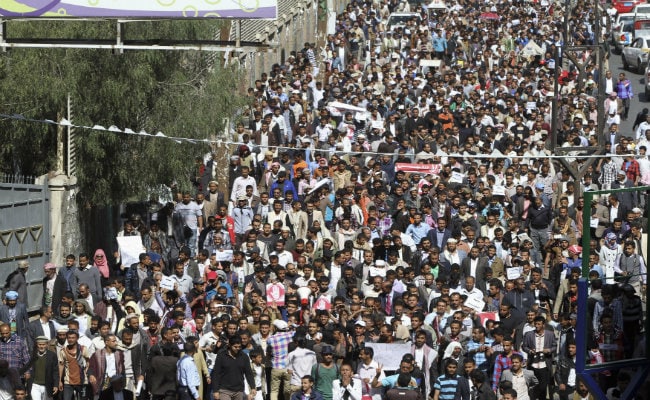 Anti-Houthi protesters take part during a rally in Sanaa on January 24, 2015. (Reuters)

Sanaa: Thousands of Yemenis took to the streets on Saturday in the biggest demonstrations yet against the Houthi group that dominates the country, two days after President Abd-Rabbu Mansour Hadi's resignation left the country in political limbo.

Witnesses said a crowd estimated at up to 10,000 people marched from Sanaa University towards Mr Hadi's home some 3 km away and back, repeating chants denouncing both the Houthi group and Al Qaeda.

"Long live the Yemeni people. No to Houthis and no to Affash," the crowd shouted, using a nickname for former President Ali Abdullah Saleh who was toppled in a 2011 uprising against his 33-year-rule.

Mr Saleh had been cited by the UN Security Council for aiding the Houthis to capture Sanaa, capital of the predominantly Sunni country, in September.

Mr Hadi, who stepped down on Thursday, blamed the Houthis' control of Sanaa for scuttling his attempt to steer Yemen toward stability after years of turmoil, tribal unrest, deepening poverty and US drone strikes on Sunni Islamist militants.

The Houthis virtually held Hadi prisoner at his home residence this week. They accuse him of reneging on a power-sharing agreement they signed with the country's main political parties in his presence after they seized Sanaa.

"We came out today to reject the coup and against the Houthi militia's control of the capital," said one student who identified herself as Maimouna, holding a placard opposing plans to incorporate the Houthi fighters into the army.

Houthi fighters prevented protesters from getting too close to Mr Hadi's house but they and the police largely kept their distance and the protest ended peacefully, witnesses said.

On Friday, thousands of Houthi supporters gathered in Sanaa with placards calling for "Death to America, Death to Israel", a slogan that has become the group's trademark.

With no central government in Sanaa, local authorities in some parts of the country announced they would no longer take orders from the capital, raising fears the country could start to splinter.

Such declarations came from provinces that comprised the former South Yemen - where a secessionist movement has been demanding independence - and the oil-rich Marib province east of Sanaa.

Promoted
Listen to the latest songs, only on JioSaavn.com
The Yemeni parliament is scheduled to meet on Sunday to discuss Mr Hadi's resignation. Under the constitution, parliamentary speaker Yahya al-Ra'i, who comes from Saleh's General People's Congress party, takes office for an interim period while new elections are organized.

Sources at a meeting between Ansarullah, the Houthis' political wing, and a group of political parties from the Sunni Islamist al-Islah and leftist parties said they had agreed to "restart the political process ... and pressure Mr Hadi to rescind his resignation". Representatives of both parties were due to inform UN Special Envoy Jamal Benomar of their position.
© Thomson Reuters 2015
Comments
YemenYemen ProtestsAl Qaeda