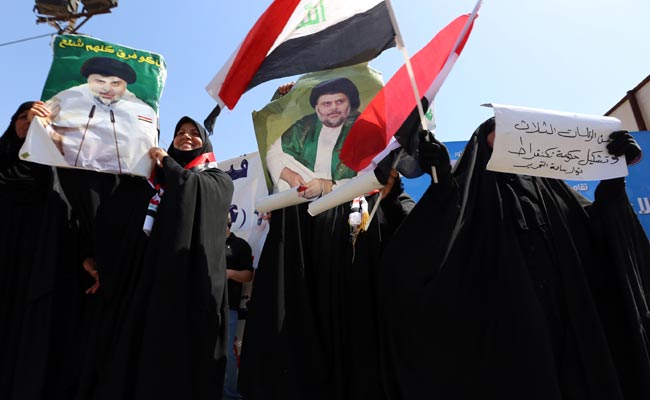 Female Iraqi supporters of powerful Shiite cleric Moqtada al-Sadr flash the sign for victory as they take part in a sit-in at Baghdad's Tahrir Square on April 24, 2016.

Baghdad, Iraq: Thousands of supporters of powerful Shiite cleric Moqtada al-Sadr answered his call to demonstrate in Baghdad on Tuesday to pressure the Iraqi government to carry out stalled reforms.

Iraq has been hit by weeks of political turmoil surrounding Prime Minister Haider al-Abadi's efforts to replace the cabinet of party-affiliated ministers with a government of technocrats.

The proposed changes have been opposed by powerful political parties that rely on control of ministries for patronage and funds, and parliament has repeatedly failed to vote on a new cabinet list.

The demonstrators, many of them carrying Iraqi flags, marched from Tahrir Square in central Baghdad to an entrance to the heavily-fortified Green Zone, where the government is headquartered, chanting that politicians "are all thieves."

"Our participation in the demonstration aims to reject this government for being sectarian," protester Abu Ali al-Zaidi said.

Key government posts have for years been shared out based on political and sectarian quotas, a practice demonstrators have called to end.

The government "did not bring the country and Iraqis anything but poverty and killing," said the 47-year-old taxi driver, who travelled from Maysan province in southern Iraq to take part in the protest.

Sadr, the scion of a powerful clerical family who in earlier years raised a rebellion against US-led forces and commanded a feared militia, called for a mass demonstration in Baghdad on Tuesday to pressure the government to carry out reforms.

The protest came on the same day that parliament speaker Salim al-Juburi was seeking to hold a session to vote on a new cabinet.

But lawmakers who have sought to remove Juburi from office announced that they would not take part, meaning the required quorum may not be reached.

Parliament has been paralysed for weeks by the dispute over the cabinet, with MPs holding a sit-in, brawling in the chamber, seeking to sack the speaker and repeatedly failing to move forward on the issue of new ministers.

Abadi called a week ago for parliament to put aside its differences and do its job, saying he hoped for a vote on a new cabinet within days -- something that has yet to take place.