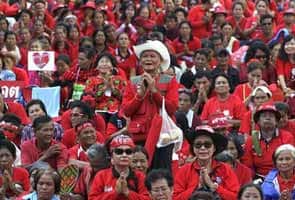 Bangkok: Buddhist monks led prayers as tens of thousands gathered in Bangkok to mark the second anniversary of deadly clashes between soldiers and "Red Shirt" protesters.

The scene Saturday was a sharp contrast with two years earlier, when Thailand was at war with itself and troops moved in to crush a nine-week anti-government protest that left more than 90 people dead and 2,000 injured. It was the country's worst political violence in decades.

Many speakers addressed the crowd Saturday to demand justice. There have been no charges filed and no prosecutions for any of the killings. A group of 100 orange-robed monks led a solemn prayer for the dead.

But the mood was also festive. Music blared from speakers as people sang and danced in the streets of central Bangkok, with several of the city's main boulevards closed to traffic to accommodate the sprawling rally.

"Coming here today, I feel free and lighthearted. I don't have to fear for my life like two years ago," said Kalong Srisang, a 52-year-old factory worker from the outskirts of Bangkok. "Back then we wanted democracy for the people.
Now we've got it. We just have to make sure it's here to stay."

Former Prime Minister Thaksin Shinawatra spoke to the crowd via video link late Saturday night, calling for justice but also for reconciliation in the still politically fractured country. Thaksin fled into exile after being ousted by a 2006 military coup, and was convicted of corruption in absentia.

"We have fought for too long," said Thaksin, dressed in a red shirt. He told the crowd that he was speaking from somewhere in Asia, but did not specify where.

"All the misunderstandings must cease. We have to stop blaming others. Let's think about our children and their future," Thaksin said.

The 2010 conflict was largely between the poor and rural masses, many of whom backed Thaksin, and supporters of Thailand's traditional power holders in the royal palace and the military.

Part of the reason for the current state of peace is because Thaksin's supporters have been appeased by the new prime minister, Thaksin's sister Yingluck Shinawatra. She won her 2011 campaign by a landslide, ending the premiership of Abhisit Vejjajiva, a staunch Thaksin opponent who ordered the May 19, 2010, crackdown on anti-government protesters who were demanding that his government immediately resign.

Much of the us-versus-them vitriol has dissipated, giving way - for now - to an apparent acceptance on both sides that while neither the current government nor its predecessors are perfect, elections may be better than street violence for deciding the country's future.

Still, deep divisions remain, and many wonder how long this phase will last.

"It's stability on the surface. The conflicts are still there," said Michael Nelson, a Thai studies lecturer at Walailak University in southern Thailand. "It's a return to business as usual, and as long as there's no really outstanding point of conflict."

New York-based Human Rights Watch has criticized both Yingluck's and Abhisit's government for failing to prosecute anyone for the scores of deaths and injuries that occurred during the political violence.

Promoted
Listen to the latest songs, only on JioSaavn.com
"This gives the green light for ... people in uniform to do this again next time," said Brad Adams, the group's Asia director.