Though same-sex marriage is against the law in Israel, polls published in the country's media this week suggest around three quarters of Israeli Jews supported permitting it. 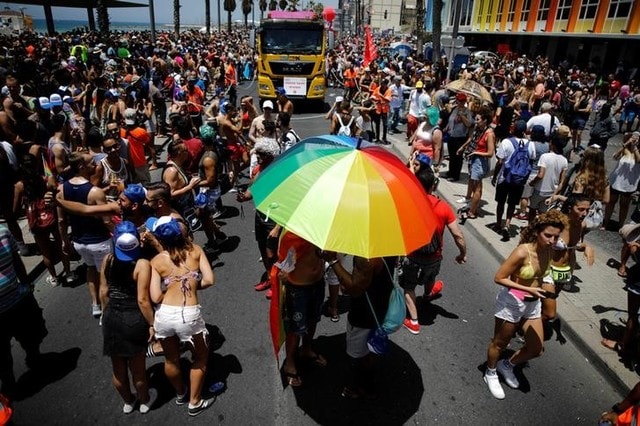 Revellers danced on the balconies of surrounding building in Israel's annual gay parade.

Tel Aviv: Tens of thousands of rainbow flag-toting revellers attended the lesbian, gay, bisexual and transgender parade in Tel Aviv on Friday, billed as the largest of its kind in the deeply conservative Middle East.

The annual parade featured floats with blaring sound systems and gyrating dancers. Revellers could be seen dancing on the balconies of surrounding building.

"We need to show ourselves and we also need to fight for others who need to feel like they can show themselves too, to empower everyone around us," Max Kratz, a parade participant from Germany told Reuters.

Same-sex marriage is against the law in Israel, but polls published in the country's media this week suggested that around three quarters of Israeli Jews supported permitting it.

"We are here to party and to celebrate with them, their freedom in Israel and we are hoping they are going in the right direction and have more privileges in the country," party-goer Shir Geri told Reuters.

Promoted
Listen to the latest songs, only on JioSaavn.com
The parade caps a week of pride festivities in the city, which authorities expected to draw 35,000 tourists. The parade is sponsored by the municipality, which said it had invested heavily to promote gay tourism in recent years.