This Firm Already Microchips Employees. Could Ailing People Be Next? 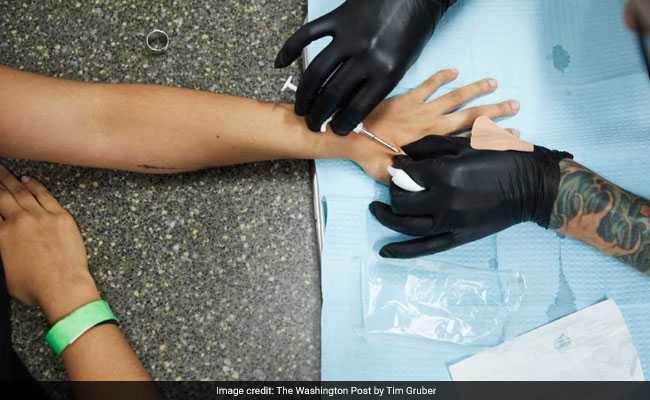 A TV reporter gets a microchip embedded under her skin

The technology company Three Square Market made headlines last year for implanting microchips in the arms of nearly 100 employees, allowing them to open doors, log on to their computers and purchase snacks from company vending machines with a simple swipe of their arm.

The chips were initially little more than an innovative novelty, but now the Wisconsin-based firm - which designs software for vending machines - has a more ambitious plan, according to their chief executive Todd Westby. During an appearance on CNBC, Westby said his company is working on a more sophisticated microchip that is powered by human body heat and includes GPS tracking capabilities and voice activation.

Microchips with GPS tracking may strike some as the first step toward handing our autonomy over to Skynet-like government overlords and Three Square Market officials admit that the chips will offer a convenient way to track people - especially those suffering from Alzheimer's and dementia.

"It's not only GPS, it's not only voice activation, it's working on monitoring your vital signs," McMullan said. "And there are different medical institutions that obviously want that."

Proponents of medical microchips point out that the devices could contain someone's entire medical history. If a patient was unconscious or suffered from memory loss, for example, those records could prove invaluable for emergency room doctors who might be unfamiliar with the person's prescribed medications or history of illness.

Critics say the practice raises serious privacy concerns, especially when considering who would be responsible for the mountains of personal data that microchips are capable of producing about an individual's movement, behaviors and health.

Westby told CNBC that 92 out of 196 of the company's employees have accepted chips and only one person has had the rice-sized device removed.

"What we've really done is made it acceptable, or brought it to the forefront where people are now talking about it and looking at the benefits it can do for a person," he noted.

As The Washington Post's Danielle Paquette noted last year, microchips aren't exactly new and have been used to tag "pets and livestock" and track deliveries.

BioHax, a Swedish company, has implanted its microchip in several thousand customers, allowing them to ride trains without using tickets and turning on the lights in their apartment, according to the company. The company claims the microchips are only used to enhance systems that are "completely under your control."

But microchips have been even more widely discussed since Three Square Market began placing radio-frequency identification tags - which cost about $300 - between employees' index fingers and thumbs.

Noelle Chesley, 49, associate professor of sociology at the University of Wisconsin-Milwaukee, told USA Today that he believes microchipped humans are an inevitability, but not for several decades. Some experts believe it will take that long for the stigma associated with the practice to wear off.

"It will happen to everybody," Chesley told the paper. "But not this year, and not in 2018. Maybe not my generation, but certainly that of my kids."