This Cruise Line Is Turning To God For Survival 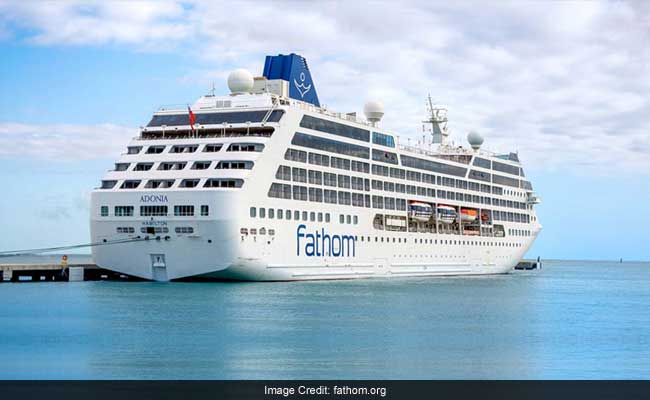 As of last week, Fathom has completed a half dozen sailings to each destination.

When people book a cruise, they generally want a vacation: sleeping in, pool time, plentiful drinks, lavish dinners. Fathom, the one-ship Carnival Corp. experiment in " social-impact travel " for travelers who want to make a difference, is definitely not for them.

Instead, it targets people who want to visit the Dominican Republic and Cuba to help local communities via social work and cultural exchange. All Carnival has to do now, however, is find a way to reach these philanthropically minded folks. As it turns out, replacing the Love Boat crowd isn't terribly easy.

Fathom's 704-guest MV Adonia alternates its seven-day stints in Puerto Plata, Dominican Republic, with weeklong cruises to destinations in Cuba, finding more customer interest in that long-verboten island where the focus is on cultural exchange and not volunteer labor. In May, Fathom enabled Carnival to become the first U.S. cruise line to offer Cuba itineraries from Florida.

On a Fathom trip , passengers seek "meaningful travel experiences to enrich the life of the traveler and work alongside locals as they tackle community needs," the company says, calling it a travel segment more than a cruise segment. But since its launch a year ago, Fathom has cut prices, and its parent company's chief executive told analysts of the early trouble in reaching potential customers. As of last week, Fathom has completed a half dozen sailings to each destination.

A crucial strategy for the brand will be marrying its service mission with churches and private schools, two places that typically focus on good works, the company says. Fathom plans to use targeted advertising to reach them, as well as travel agents who specialize in travel for that segment. Private schools with service mandates, college civic organizations, and other people who participate in service-oriented clubs are also being sought. Community chambers of commerce may supply customers. "T here is no shortage of different types of groups that travel," said Ron Fenska, Fathom's vice president of sales, who joined Fathom in January.

"Religion is a natural fit, and there are all these denominations that work extremely well," Fenska says, citing traditional Protestant congregations, nondenominational mega-churches, synagogues, and Catholic parishes.

Fathom, which introduced itself last June with a music-themed ceremony at a Manhattan theater, slashed prices as low as $249 this year for some of its weeklong cruises to the Dominican Republic. In its earliest days, Fathom was aiming for fares of $1,500 per week and more. Some of its revenue is shared with local organizations in the country, but Carnival doesn't disclose how much.

Carnival officials attribute Fathom's growing pains to both its novelty at the big cruise-line level and its need for a radically different sales approach from that of traditional cruising. "There are people who want that experience," Carnival CEO Arnold Donald said in a June 28 interview. "Our strategy was to launch it and to use word of mouth and build alternative sales organizations."

Some travel agents aren't sure how to describe the brand, or its mission, and Fathom has to be vigilant to ensure that prospective customers don't end up surprised to find no casino. Fathom employees also try to avoid the word "cruise" whenever possible, given its mass-market connotation of leisure revelry. (Offerings that Fathom's cruises do have include Dominican food, language classes, and native dance lessons.)

On a June 28 call with analysts, Donald conceded that "our ability to access that segment is challenging. We remain very optimistic about the brand, but the reality is we have to see the bookings."

Fathom will suffer from insufficient demand for its Dominican Republic trips "until the agent market fully understands the product," said John Maguire, a travel sales veteran who took his 13-year-old daughter to the country this year to evaluate the offering. Carnival also will need to create more explanatory content about Fathom and its goals, with videos and text that help consumers understand it- and to cull those for whom it's not a good fit, said Maguire, CEO of Morristown, N.J.-based which operates agencies specializing in cruise sales.

Over time, Fenska predicts that half of Fathom's business will come from groups. The brand is also working to build charter sales, the kind of low-risk business all cruise brands seek. Fathom has several charters booked for 2017, he said. Yet church mission groups and private schools represent "the low-hanging fruit," especially in matching the Dominican work with customer service goals.

"In many situations when you get into the mega-churches . . . they have teams that do this on a monthly basis and source trips," Fenska said. "For us, that is a completely natural fit."