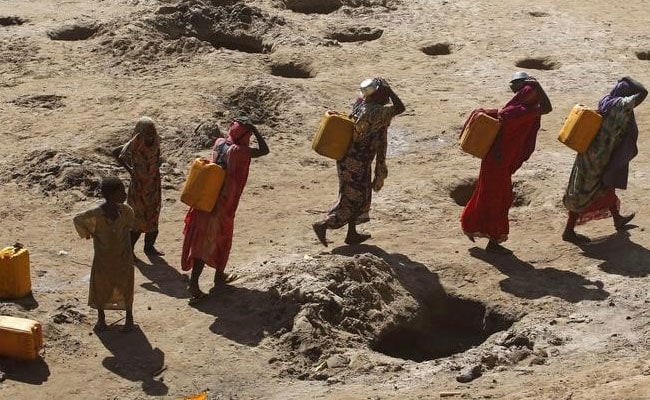 A second poor rainy season in Somalia has pushed livestock herders in the drought-hit Puntland region to trek an average of 60 km (40 miles) to fetch drinking water, aid agencies said on Monday, calling for rapid action to prevent renewed famine.

Five million Somalis, or more than four out of ten people, do not have enough to eat because of poor rains and fighting between the Islamist militant group al Shabaab and Somalia's African Union-backed government.

"We have been repeatedly promising to not let this happen again... What are we waiting for?"

It called on humanitarians and donors to revise existing projects to focus on life-saving support for women, children and other communities hard-hit by the drought.

"It is our responsibility as donors, as implementers, as national and local authorities, as Somali business community... to see that this drought does not lead to a famine," it said.

Somalia's 2011 famine, which killed 260,000 people, was caused by drought, conflict and a ban on food aid in territory held by al Shabaab.

Charities have repeatedly warned about the threat of renewed famine as the Horn of Africa nation continues to be plagued by poor rains and conflict, as well as shortages of aid.

Humanitarian access to the al Shabaab strongholds of Lower and Middle Juba regions remains limited, agencies said, with satellites monitoring rainfall trends showing those areas to be "the most worrying in all of Somalia".

International attention has shifted away from the drought to Somalia's elections, Kenya's plan to close Somali-dominated Dadaab refugee camp, conflict and the withdrawal of peacekeepers from more than eight areas, the agencies said.

Thousands have been displaced in recent weeks by fighting between the warring Galmudug and Puntland semi-autonomous regions and around the central town of Afgoye.

Al Shabaab has seized control of several towns in central Somalia after they were abandoned by Ethiopian contingents in the Africa Union peacekeeping force.

© Thomson Reuters 2016
Promoted
Listen to the latest songs, only on JioSaavn.com