'These Should Be Kids': 7,000 Pairs Of Shoes On Capitol Lawn Show Toll Of Gun Violence

Each pair of shoes represents a child who has been killed since 2012. Washington: At the edge of a sea of shoes Tuesday morning outside the Capitol, a little girl stood teetering on the balls of her feet.

Eliana Malkoff, 3, wanted to run through the rows of ruby slippers, fuzzy boots, flip flops and sneakers. Her mother told her that this wasn't a place to play.

The reason these shoes were here, Shawna Malkoff said, was serious.

But like several other parents with young children who visited the sprawling display, Malkoff couldn't bring herself to explain the reason for it.

About 7,000 pairs of shoes sat on the southeast lawn of the Capitol as a memorial to children slain by guns since the mass shooting in December 2012 at Sandy Hook Elementary School in Newtown, Connecticut.

Avaaz, a global activist network that organizes campaigns involving social issues, solicited donations from around the country to fill the lawn with children's shoes and send a message to Congress about the toll that gun violence takes.

According to the nonprofit Gun Violence Archive, there have been 239 school shootings nationwide since it began tracking the shootings about a year after the Sandy Hook attack. It defines a school shooting as any gunfire on school property when students, faculty or staff are on the site.

The group also says that more than 650 children have been killed or wounded by gunfire this year.

A March 24 rally against mass shootings and gun violence will bring as many as 500,000 people to downtown Washington, D.C., for the March For Our Lives rally, organized by survivors of last month's school shooting in Parkland, Florida, that left 17 dead.

But thousands of children won't be there, said Nell Greenberg, an Avaaz campaign director, because they were killed.

"These should be kids. There should be kids in these shoes. But instead they're just empty," she said. "Every pair of shoes out here represents a child who can't march for themselves anymore."

Among them were her daughter's shoes. 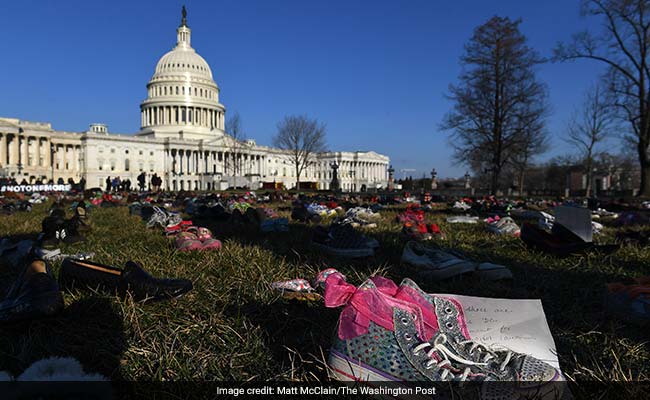 There are about 7,000 pairs of shoes on the grounds of the Capitol lawn representing children

Greenberg and other Avaaz volunteers worked through the brisk wind just before sunrise Tuesday, pulling each pair from plastic bags and setting them in neat rows on the grass.

As they worked, Greenberg said, she noticed that several had come with messages or items stuffed inside.

One family had put a container of play dough inside a pair of boots. Others rolled up notes and letters.

Inside a pair of shoes with an orthopedic support brace attached was a handwritten note: "Not all children can run."

"That just broke me," Greenberg said.

Tom Mauser, whose son, Daniel, was killed in the 1999 massacre at Columbine High School, was among several who put the shoes of slain family members on display.

Mauser, of Colorado, brought a pair of his son's Reebok sneakers that he found in Daniel's closet after the attack.

In the past two decades, Mauser has become an advocate for gun-control measures, traveling the country to picket, protest and march.

He said he is disheartened that, so long after his son's death, he finds himself doing much the same thing.

"We did this in Denver," he said, gesturing to the rows of shoes. "We put shoes just like this on the steps of the state capitol - twice. I'm not shocked I have to keep doing this. I'm angry. But I'm not surprised."

On his feet, Mauser wore the sneakers Daniel was wearing the day he was killed.

"I save these for special occasions," the father said. "I want these to last."

This wasn't the first time Avaaz had tackled the issue of gun violence with an eye-catching display. 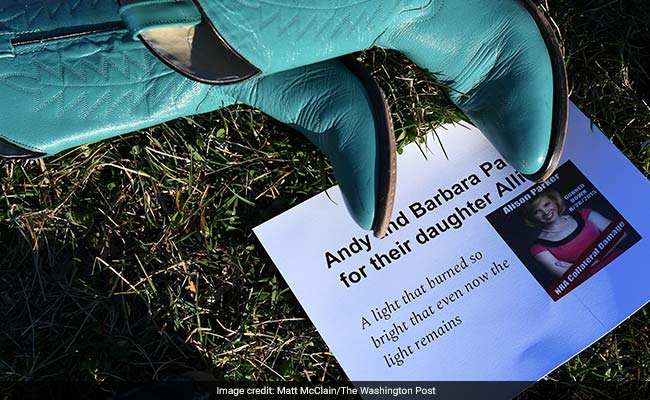 The group was responsible for a recent protest targeting Sen. Marco Rubio, R-Fla., with three billboards inspired by the movie, "Three Billboards Outside Ebbing, Missouri," that said in bold, black letters on red screens:

"And still no gun control?"

Organizers said they hadn't been approached Tuesday by lawmakers or congressional staff, who were steps away. There were, however, several people affected by gun violence drawn in by the spectacle.

A mother from Parkland, Florida, was visiting the District with her family to escape the pain looming over her home town when she happened upon the shoes.

As she stared out at them, her voice shook.

"We all know people who were there," Laurie Garey, 54, said of the shooting at Marjory Stoneman Douglas High School. "This blows my mind, thinking about how all these kids. They were all there in their own little shoes when it happened."

Her two children, teenagers who attend a private school in the Parkland area, stood by as she showed off the words she had tattooed on her forearm last week: "Never again."

Jonathan Kriyk, 20, and Brianne Wendol, 19, said the shoes felt personal to them. Now students at Florida universities, they were in middle school when the Sandy Hook massacre happened and the reality of mass shootings came lurching into their consciousness.

"It hits so close to home every time, and nothing changes," said Wendol, who is majoring in political science at Florida State University. "I'm terrified that one of these days it's going to hit right at home and it will be me or one of my siblings."

"We grew up in this," added Kriyk, who studies education at the University of South Florida. "This is our reality, and we're tired of it. Something needs to change."

As they spoke, with heads bent against the gusts of wind, little Eliana leaned against her mother.

She was wearing pink snow boots.

(This story has not been edited by NDTV staff and is auto-generated from a syndicated feed.)
Comments
Gun Violence in USschool shootingGun Control in US