Zume is noteworthy because it makes fresh, customizable delivery pizza with high-quality ingredients, which it considers to be artisanal even though it is not made by hand. 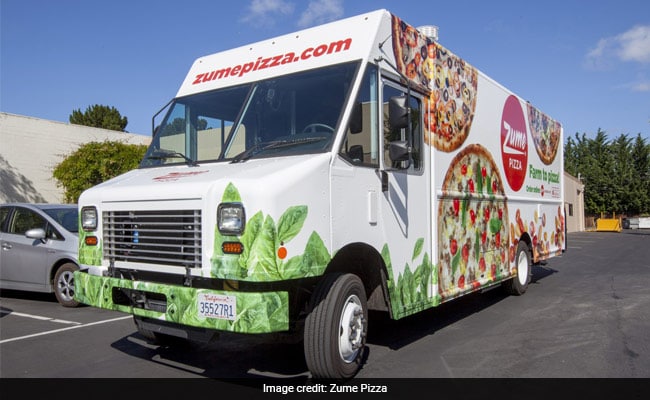 Zume can now make and deliver 372 pizzas an hour.

A great pizza dough flipper probably can't turn out one perfectly shaped pizza dough every nine seconds, but one California company's robotic pizza dough press can make a great pie at that whiplash-inducing rate. Silicon Valley start-up Zume Pizza has nearly fully automated the process of making fresh, made-to-order pizza - and it's streamlined the delivery process, too. If you live in Mountain View, California, and you order a pizza, it could be at your door as quickly as four minutes later.

While other pizzas - especially the bake-at-home kind you buy at the grocery store - are also made by machine, Zume is noteworthy because it makes fresh, customizable delivery pizza with high-quality ingredients, which it considers to be artisanal even though it is not made by hand. Zume co-founder Julia Collins already has Pepe and Giorgio, two robots, squirting pizza sauce onto the dough, and Marta, another robot, spreading the sauce. Bruno, a robotic arm, lifts the pizza into the oven. The dough is still made by humans. But now that Zume has the doughbot, as they're calling it, it means that the only part of the pizza assembly process that requires a human touch is the toppings.

"Human beings are great at that step," Collins said. "When we think of the end-of-arm tools that we would need to pick up a cherry tomato and then a nugget of sausage, it's hard to find tools that manage that much variety. We don't have any intention of limiting variety to serve the robots."

With this technological upgrade, the company can now make and deliver 372 pizzas an hour. That efficiency comes from dramatically reimagining the way pizza can be delivered. Zume is the first company to reduce "dwell time" - a.k.a the 20 minutes your piping-hot pizza spends sliding around in the back of a Honda Accord. They have custom delivery trucks that can bake en route, so pizza will arrive fresh out of the oven. Through analyzing their customer data and using artificial intelligence, they're also able to predict which pizzas will be popular in certain neighborhoods during certain times, so the truck can be preloaded and ready to serve.

Zume is now adding scooters to its delivery fleet, which will use the baking trucks as a hub. If someone wants a pizza that isn't in the truck's preloaded orders, it can take up to 45 minutes from when the order is placed to when the pizza arrives at your door. But if you order a basic pepperoni pizza and the truck is already circling your neighborhood, it could be at your door as quickly as four minutes later.

The food delivery industry is growing rapidly: Consulting firm McKinsey expects that the market for new delivery will reach more than 20 billion euros - $22.7 billion - by 2025. Other tech companies are working on transforming delivery, as well: Starship Technologies, an Estonian company, is using Washington sidewalks for its robot delivery pilot program. The rolling robots - they're almost cute, like WALL-E - deliver food for Postmates, and eventually, the company hopes they will be able to make other courier deliveries for $1 a trip.

For now, Zume Pizza is only available in Silicon Valley. Collins says the company will expand up to Menlo Park, and down to San Jose, before moving to other cities. They also are considering eventually leasing space in their trucks to other food companies that also want to bake en route. Susan Alban, a former general manager of UberEats, has joined the company to work on its expansion.

Promoted
Listen to the latest songs, only on JioSaavn.com
"[We] wanted to be sure that the delivery experience was the best it could be," Collins said. "It's different when you're building just an app. When you're putting food in people's mouths . . . you better take some time and get it right."