There's A Growing Sinkhole On The White House Lawn

The pit in the ground, first reported by White House correspondents on site this week, appears to have opened just outside the press briefing room. 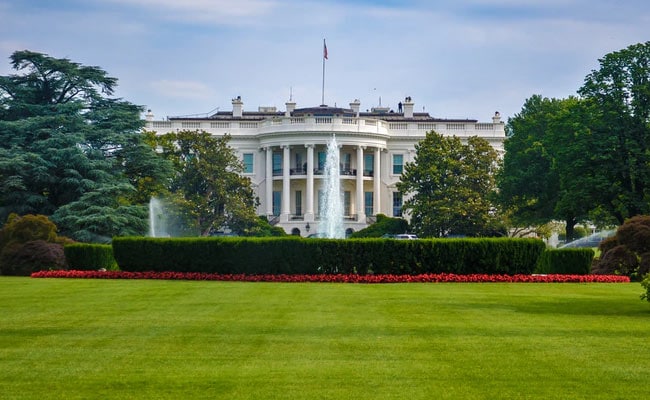 Groundskeepers had placed orange cones and caution tape around the spot on the lawn. (Representational)

For all the concern over leaks at the White House, a more pressing problem might be the sinkhole on the North Lawn that appears to be growing by the day.

The pit in the ground, which was first reported by White House correspondents on site this week, appears to have opened just outside the press briefing room and deputy White House press secretary Hogan Gidley's office.

Steve Herman, a reporter with Voice of America, tweeted that he first spotted the sinkhole last week. It has since grown, and another sinkhole has opened next to it.

Sinkholes, which have been known to swallow streets, cars and even homes, tend to occur when rainwater seeps into the soil and loosens the sediment enough to send it sinking into crevices beneath the surface.

It was not clear what caused the emergence of the White House sinkholes.

As of Tuesday afternoon, groundskeepers had placed orange cones and caution tape around the spot on the lawn. But they couldn't do anything to keep the Internet at bay.

"It's not like a growing sinkhole right outside the press briefing room at the White House has any existential meaning to it at all, right?" said Twitter user Jeff Urbanchuk.

A magazine editor tweeted that the sinkhole was a "resistance icon."

Even Dictionary.com got into the act, tweeting "Sinkhole: A hole formed in soluble rock by the action of water. Also a sinkhole: A place into which foul matter runs."

By midafternoon, the sinkhole had its own following self-described as #TeamSinkhole, and of course, its own Twitter account - @WHsinkhole.

This isn't the first time one of President Donald Trump's residences has been vexed by a sinkhole.

Exactly one year ago to the day, a sinkhol opened in front of Mar-a-Lago, Trump's estate in Palm Beach, Florida.

That hole, which was about 4 feet by 4 feet, was much larger than its White House counterpart appears to be. Palm Beach officials blamed the widening ditch on a newly installed water main in the area.

Promoted
Listen to the latest songs, only on JioSaavn.com
Still, many believed it was a sign of something, well, deeper.