The Fanged, Faceless Sea Creature That Washed Ashore During Harvey Has Been Identified

After high winds and heavy rains brought by Hurricane Harvey, a mysterious sea creature with fangs and no face washed up on the shoreline in southwest Texas - giving the Internet a challenging task: to identify it. 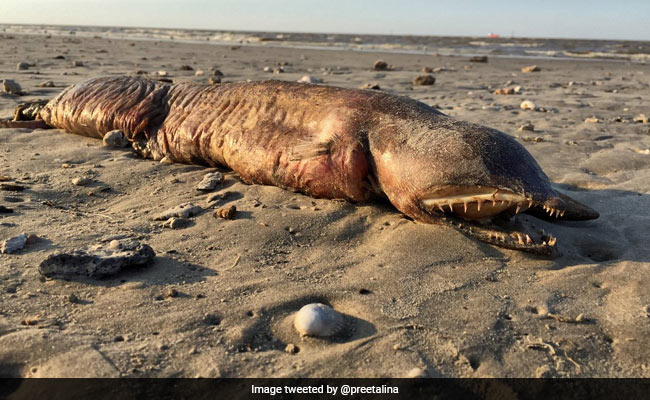 Mysterious sea creature with fangs and no face washed up on shoreline in Texas after hurricane Harvey.

After high winds and heavy rains brought by Hurricane Harvey, a mysterious sea creature with fangs and no face washed up on the shoreline in southwest Texas - giving the Internet a challenging task: to identify it.

Preeti Desai, social media manager at the National Audubon Society, posted pictures of the critter earlier this month on Twitter, asking, "What the heck is this??"

Desai, who said she had accompanied conservationists assessing the damage from the storm, spotted the creature on a beach in Texas City, about 15 miles from Galveston.

The Internet gave its best guesses:

"I follow a lot of scientists and researchers," Desai told BBC News about her plea for answers on social media. "There's such a great community of these folks that are very helpful, especially when it comes to answering questions about the world or identifying animals and plants."

She said someone suggested that she contact Kenneth Tighe, a biologist with the Smithsonian National Museum of Natural History.

Tighe, an eel expert, told Earth Touch News that the creature was most likely a fangtooth snake-eel, or Aplatophis chauliodus.

Okay, biology twitter, what the heck is this?? Found on a beach in Texas City, TX. #wildlifeidpic.twitter.com/9IUuuL65qh

Fangtooth snake-eels live in burrows 100 to 300 feet down in waters stretching from the Gulf of Mexico to French Guiana, "with only snout and eyes exposed, darting to feed on other fishes and crustaceans," according to FishBase, an online database for fish species.

"All three of these species occur off Texas and have large fang-like teeth," Tighe told Earth Touch News. "Too bad you can't clearly see the tip of the tail. That would differentiate between the ophichthid and the congrids."

She wrote in a post Sept. 8 on Audubon's website that in the wake of Hurricane Harvey, she traveled to Houston to help document "the effects of the hurricane on birds and their habitats."

"I joined Audubon Texas's Coastal Conservation program manager, Victoria Vazquez, and coastal warden, Dennis Jones, to visit some of the rookery islands off the coast of Galveston and assess the damage," she wrote. "They wanted to take a look at things like how much land had been lost and how much plant cover was missing due to being uprooted or washed away. Changes like these could affect the number of species that will be able to nest on the habitat in the future."

"Audubon Texas and partner organizations like Houston Audubon collectively own or lease more than 170 coastal islands, some of which appear and disappear as currents shift and waves wash over them. These islands, even when they're no more than sandbars, are supremely important for many colonial water birds - birds that gather in groups - as they nest and breed during the spring and summer months. Visit at the right time and you'll find American Oystercatchers, Brown Pelicans, Least Terns, and more. (But be careful - birds are especially vulnerable during nesting season and no visitors are allowed on the islands from February through August.) Brown Pelicans in particular were at risk of extinction in the 1970s, and although they've made a comeback since then, their nesting areas (and those of many other species) are now in trouble due to rising sea levels and stronger storms caused by climate change. So it was a positive that most of the chicks had fledged by the time Harvey hit."

Still, people on social media were more interested in - and spooked by - the sea creature she stumbled upon while she was there.

Promoted
Listen to the latest songs, only on JioSaavn.com
© 2017 The Washington Post