That cuddly kitty is deadlier than you think 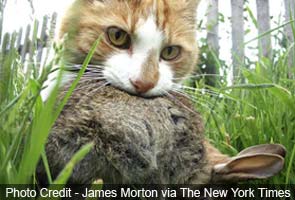 For all the adorable images of cats that play the piano, flush the toilet, mew melodiously and find their way back home over hundreds of miles, scientists have identified a shocking new truth: Cats are far deadlier than anyone realized.

In a report that expanded results from local surveys and pilot studies, scientists from the Smithsonian Conservation Biology Institute and the Fish and Wildlife Service estimated that U.S. domestic cats - both the pet Fluffies that spend part of the day outdoors and the unnamed strays and ferals that never leave it - kill a median of 2.4 billion birds and 12.3 billion mammals a year, most of them native animals like shrews, chipmunks and voles rather than introduced pests like the Norway rat.

The estimated kill rates are two to four times as high as those previously bandied about, and they position the domestic cat as one of the single greatest human-linked threats to wildlife. More birds and mammals die at the mouths of cats, the report said, than from automobile strikes, pesticides and poisons, collisions with skyscrapers and windmills, or other similar causes.

Peter Marra of the Smithsonian Conservation Biology Institute, an author of the report, said the mortality figures that emerge from the new model "are shockingly high."

"When we ran the model, we didn't know what to expect," said Marra, who performed the analysis with his colleague, Scott R. Loss, and Tom Will of the Fish and Wildlife Service. "We were absolutely stunned by the results."

The study appeared Tuesday in the journal Nature Communications.

The findings are the first serious estimate of just how much wildlife the country's vast population of free-roaming domestic cats manages to kill each year.

"We've been discussing this problem of cats and wildlife for years and years, and now we finally have some good science to start nailing down the numbers," said George H. Fenwick, the president and chief executive of the American Bird Conservancy. "This is a great leap forward over the quality of research we had before."

In devising their mathematical model, the researchers systematically sifted through the existing scientific literature on cat-wildlife interactions, eliminated studies in which the sample size was too small or the results too extreme, and then extracted and standardized the findings from the 21 most rigorous studies. The results admittedly come with wide ranges and uncertainties.

Nevertheless, the new report is likely to fuel the sometimes vitriolic debate between environmentalists who see free-roaming domestic cats as an invasive species - super-predators whose numbers are growing globally even as the songbirds and many other animals the cats prey on are in decline - and animal welfare advocates who are appalled by the millions of unwanted cats (and dogs) that are euthanized in animal shelters each year.

Most concur that pet cats should not be allowed to prowl around the neighbourhood at will, any more than should a pet dog, horse or potbellied pig, and that cat owners who insist their felines "deserve" a bit of freedom are being irresponsible and ultimately not very cat friendly. Through recent projects like Kitty Cams at the University of Georgia, in which cameras are attached to the collars of indoor-outdoor pet cats to track their activities, cats have not only been filmed preying on cardinals, frogs and field mice, they have also been shown lapping up antifreeze and sewer sludge, dodging under moving cars and sparring violently with big dogs.

"We've put a lot of effort into trying to educate people that they should not let their cats outside, that it's bad for the cats and can shorten the cats' lives," said Danielle Bays, the manager of the community cat programs at the Washington Humane Society.

Yet the new study estimates that free-roaming pets account for only about 29 per cent of the birds and 11 per cent of the mammals killed by domestic cats each year. The larger problem is how to manage the 80 million or so stray and feral cats that commit the bulk of the wildlife slaughter.

The Washington Humane Society and many other animal welfare organizations support the use of increasingly popular trap-neuter-return programs, in which unowned cats are caught, vaccinated, spayed and, if no home can be found for them, returned to the outdoor colony from which they came. Proponents see this approach as a humane alternative to large-scale euthanasia, and they say a colony of neutered cats can't reproduce and thus will eventually disappear.

Conservationists say that, far from diminishing the population of unowned cats, trap and release programs may be making it worse, by encouraging people to abandon their pets to outdoor colonies that volunteers often keep lovingly fed.

"The number of free roaming cats is definitively growing," Fenwick of the bird conservancy said. "It's estimated that there are now more than 500 TNR colonies in Austin alone."

They are colonies of subsidized predators, he said, able to survive in far greater concentrations than do wild carnivores by dint of their people-pleasing appeal.

"They're not like coyotes, having to make their way in the world," he said.

Yet even fed cats are profoundly tuned to the hunt, and when they see something flutter, they can't help but move in for the kill. Fenwick argues that far more effort should be put into animal adoption.

"For the great majority of healthy cats," he said, "homes can be found."

Promoted
Listen to the latest songs, only on JioSaavn.com
Any outdoor colonies that remain should be enclosed, he said.