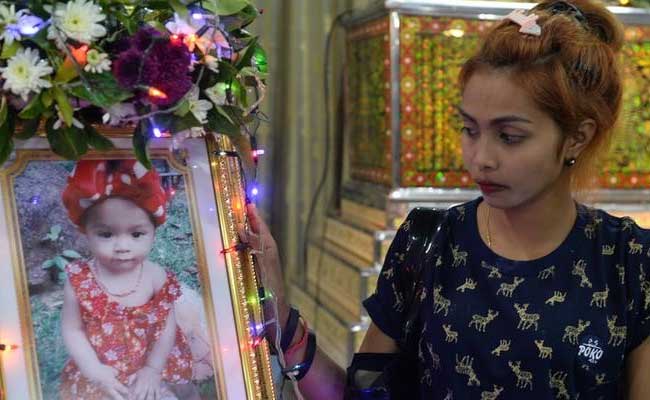 A video from Thailand showed a man tying rope to his daughter's neck before dropping the child. (Reuters)

Bangkok: A Thai man filmed himself killing his 11-month-old daughter in two video clips posted on Facebook before committing suicide, police said on Tuesday. People could access the videos of the child's murder on her father's Facebook page for roughly 24 hours, until they were taken down around 5 pm in Bangkok (1000 GMT) on Tuesday, or about a day after being uploaded. "This is an appalling incident and our hearts go out to the family of the victim," a Singapore-based Facebook spokesman said in an email to Reuters. "There is absolutely no place for content of this kind on Facebook and it has now been removed."

Murders, suicides and sexual assault have plagued Facebook despite making up a small percentage of videos. On Tuesday a Swedish court jailed three men for the rape of a woman that was broadcast live on Facebook.

Last week, Facebook said it was reviewing how it monitored violent footage and other objectionable material after a posting of the fatal shooting of a man in Cleveland, Ohio was visible for two hours before being taken down.

The harrowing footage from Thailand showed Wuttisan Wongtalay tying a rope to his daughter Natalie's neck before dropping the child, dressed in a bright pink dress, from the rooftop of a deserted building in the seaside town of Phuket.

Wuttisan's suicide was not broadcast but his lifeless body was found beside his daughter, said Jullaus Suvannin, the police officer in charge of the case.

"He was having paranoia about his wife leaving him and not loving him," Jullaus told Reuters.

Wuttisan's wife, Jiranuch Triratana, told Reuters she had lived with him for over a year. At first the relationship had gone well, she said, but then he grew violent and sometimes hit her 5-year-old son from a previous husband.

She feared that something was wrong on Tuesday when she found he had left home with Natalie, whose nickname was Beta. She set out to look for them.

"I was afraid he would hurt our daughter even though he loved her," she told Reuters by phone from the funeral.

Thailand's Ministry of Digital Economy said it contacted Facebook on Tuesday afternoon about removing the videos, after receiving a police request.

"We contacted Facebook today and Facebook removed the videos," ministry spokesman Somsak Khaosuwan told Reuters, adding that the government would take no action against the company.

"We will not be able to press charges against Facebook, because Facebook is the service provider and they acted according to their protocol when we sent our request. They cooperated very well."

After the company faced a backlash for showing the video of the Cleveland killing, Chief Executive Officer Mark Zuckerberg said Facebook would do all it could to prevent such content in the future.

"This is the most evil clip I've seen in my life," said one user, Avada Teeraponkoon. "I couldn't stand it for more than one second."

"How can he watch his own child stop breathing?" said another, Rujirek Polglang. "He should have just died alone."

The killing was the first in Thailand known to be broadcast on the social networking site, said deputy police spokesman Kissana Phathanacharoen.

"It could be influenced by behaviour from abroad, most recently in Cleveland," Kissana told Reuters.

Facebook, the world's largest social network, has not said how long its review of internal operations might take. The California company declined to answer questions about the latest incident or make employees available for interviews.

The company relies largely on reports from its 1.9 billion users to find objectionable material. Flagged items are forwarded to thousands of Facebook workers who judge whether they should be taken down.

Facebook has said it is working on software to automatically flag videos that are objectionable. But a person who has worked on the issues at Facebook said that major Silicon Valley companies were still working on the much easier problem of blocking previously identified child pornography videos. Identifying violence in a newly uploaded video would be very difficult, this person said.

Advertisers have not identified the violent videos as a major concern. Facebook is still a safe place for companies to build brands, said Barry Lowenthal, president of the Media Kitchen, a New York-based media buyer.

Promoted
Listen to the latest songs, only on JioSaavn.com
"It's pretty amazing that they were able to figure it out and get it down in such a short period of time with 2 billion users," he said.