Thai Authorities to Probe Surrogacy Clinics amid Down Case Controversy 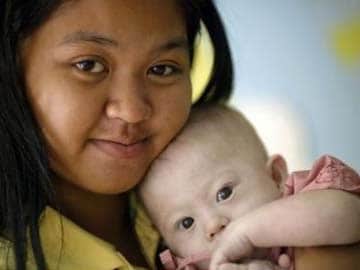 Gammy, a baby born with Down's Syndrome, is held by his surrogate mother Pattaramon Janbua at a hospital in Chonburi province August 3, 2014.

Bangkok: Authorities in Thailand are to inspect all the clinics in the country offering surrogacy services to see if they are operating within the law after a Thai woman who carried twins for an Australian couple was left caring for a baby with Down Syndrome.

The case has caused controversy in both Thailand and Australia, bringing calls to prohibit commercial surrogacy in the Southeast Asian country to end a lucrative trade.

In Australia, the case has sparked calls for an overhaul of surrogacy laws to cut the number of couples travelling abroad to find surrogates.

The nationwide inspection in Thailand would start next week, Lieutenant Colonel Chatmongkol Wasinamorn of the police consumer protection division said on Tuesday.

Commercial surrogacy is against the Medical Council of Thailand's code of conduct. Surrogacy is permitted if blood relatives of the couple are the surrogates, although exceptions are permitted if no suitable surrogate is available.

The council is an independent agency that supervises doctors and the medical system but needs support from the police and other state agencies to help deal with any violations of its code.

The surrogate mother, Pattaramon Janbua, 21, has said she agreed to a fee of 350,000 baht ($10,900) to carry the twins for the Australian couple. They took the girl she delivered back home with them but left the boy, Gammy, behind.

Now seven months old, he is being treated for a lung infection in a hospital east of Bangkok. He also needs surgery for a congenital heart condition, according to media reports.

A friend of the couple, who have not spoken publicly, told a newspaper in Australia the experience had been "absolutely devastating".

The couple, from the small town of Bunbury in Western Australia, denied that they requested an abortion when they found out Gammy had Down Syndrome and denied abandoning the baby, the Bunbury Mail reported the friend had said.

The twins were born prematurely and the couple were told Gammy would not survive, according to the report.

"They prayed for Gammy to survive but were told by doctors that he was too sick, not because of the Down Syndrome but because of his heart and lung conditions and infection," the newspaper quoted the friend as saying.

An official at Australia's Department of Foreign Affairs and Trade said Gammy's case was "sad, complex and difficult" and the Australian government was working with Thai authorities to clarify its legal position on surrogacy, which was unclear.

Vichien Chavalit, permanent secretary of Thailand's Ministry of Social Development and Human Security, said this week there were no laws governing surrogacy in Thailand. A law had been drafted but not yet submitted to parliament, he said.

The surrogate mother, Pattaramon, said her doctors, the surrogacy agency and the baby's parents knew he was disabled when she was four months pregnant but did not inform her until the seventh month when the agency asked her - at the parents' request - to abort the disabled foetus.

Pattaramon told Reuters Television that, as a Buddhist, she refused the abortion on religious grounds.

The agency manager who had been in charge of the case confirmed the Australian couple were informed before Pattaramon.

"They knew that they had twins and that one of the children had Down Syndrome," the manager, who gave her name as Joy, told Reuters Television. "We told the Australian couple first because we believed that the decision should be made by the biological parents."

She declined to give her full name and said she left the agency several months ago. She would not comment on the abortion proposal or other matters.

Promoted
Listen to the latest songs, only on JioSaavn.com
Pattaramon told a news conference on Tuesday she had never spoken directly to the Australian couple, although she told Reuters later that she had met them in Thailand.

"We met three times," she said in a telephone interview. "We speak different languages so we couldn't discuss much."
© Thomson Reuters 2014