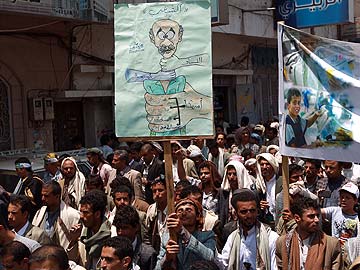 Yemeni supporters of the Shiite Huthi group holds placards during a demonstration against the government and against a petrol tax increase on August 18, 2014 in the centre of the capital Sanaa

Sanaa: Tens of thousands of people joined an anti-government rally in Sanaa on Monday in response to a call by Shiite rebel commander Abdulmalik al-Huthi, an AFP journalist reported.

The protesters assembled in Change Square then paraded in the centre of the capital, where supporters of the rebels, who are known as Huthis or Ansarullah, had converged during the morning after travelling from outside the capital.

A tight security cordon was thrown up around Sanaa, with increased security along the main roads, though no incidents had been reported by the middle of the day.

The demonstrators chanted slogans against the government, which has struggled to manage the political transition since the ouster in 2012 of veteran president Ali Abdullah Saleh.

They also protested against a petrol tax increase brought in at the end of July.

In a speech on Sunday night, Abdulmalik al-Huthi called on his followers to march on Sanaa and demand "the fall of the government, which has failed."

He gave the government a deadline of Friday to meet the protesters' grievances.

In the coming days, "we will erect tents, carry out sit-ins and organise marches" in Sanaa, the rebel leader said, threatening to respond to any provocation.

"We won't stand with folded arms in the face of crime," he said.

Huthis, who have been battling the central government for years, repeatedly complained of marginalisation under Saleh, who ruled for 33 years.

Ansarullah activists had demonstrated in early August against the near-doubling of petrol prices as well as seeking the government's overthrow.

A World Bank study in 2012 found that 54 percent of Yemenis live below the poverty threshold.

Promoted
Listen to the latest songs, only on JioSaavn.com
Ansarullah controls Saada province in northern Yemen and is suspected of wanting to broaden its sphere of influence in a future federal state, potentially comprising six provinces.

Huthi forces reached just outside Sanaa in July when they took the city of Amran, though they later agreed to withdraw.
Comments
YemenAbdulmalik al-Huthiprotest