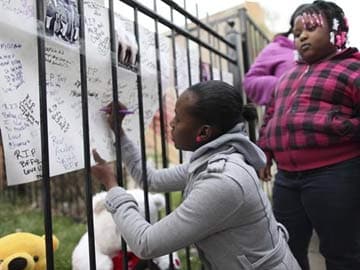 In this April 30, 2014 photo, family and friends of 14-year-old Endia Martin sign posters at a makeshift memorial during a vigil for the girl who was shot and killed April 28 in Chicago allegedly by another 14-year-old girl in a dispute concerning a boy.

Chicago: A 14-year-old girl's appearance in court on a murder charge highlights the problem of gun violence plaguing Chicago.

Friday's hearing for the girl in juvenile court will be the latest chapter in a story that began April 28, when the teen allegedly shot and killed 14-year-old Endia Martin in what police say was a fight over a boy.

Promoted
Listen to the latest songs, only on JioSaavn.com
With allegations that a 25-year-old uncle who has used a wheelchair since he was shot in what police say was a gang-related shooting brought the teen a gun at her request, the case also underscores just how entrenched violence is in some pockets of Chicago.

Police Superintendent Garry McCarthy says it illustrates a "cycle of violence." The number of slayings fell last year but Chicago still leads the nation in homicides.