Taliban terrorize Karachi as the new gang in town 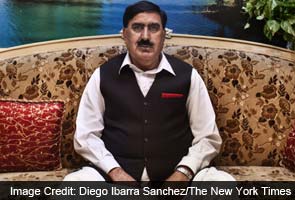 Shahi Syed, a provincial head of the Pashtun-dominated Awami National Party, at his headquarters in Karachi, Pakistan

Karachi, Pakistan: This seaside metropolis is no stranger to gangland violence, driven for years by a motley collection of armed groups who battle over money, turf and votes.

But there is a new gang in town. Hundreds of miles from their homeland in the mountainous northwest, Pakistani Taliban fighters have started to flex their muscles more forcefully in parts of this vast city, and they are openly taking ground.

Taliban gunmen have mounted guerrilla assaults on police stations, killing scores of officers. They have stepped up extortion rackets that target rich businessmen and traders, and shot dead public health workers engaged in polio vaccination efforts. In some neighborhoods, Taliban clerics have started to mediate disputes through a parallel judicial system.

The grab for influence and power in Karachi shows that the Taliban have been able to extend their reach across Pakistan, even here in the country's most populous city, with about 20 million inhabitants. No longer can they be written off as endemic only to the country's frontier regions.

In joining Karachi's street wars, the Taliban are upending a long-established network of competing criminal, ethnic and political armed groups in this combustible city. The difference is that the Taliban's agenda is more expansive - it seeks to overthrow the Pakistani state - and their operations are run remotely from the tribal belt along the Afghan border.

The militants have reshaped the city's political balance by squeezing one of the most prominent political machines, the Pashtun-dominated Awami National Party, off its home turf. They have scared Awami operatives out of town and destroyed offices, gravely undercutting the party's chances in national elections scheduled for May.

"We are the Taliban's first enemy," said Shahi Syed, the party's provincial head, at his newly fortified office. "They burn my offices, they tear down my flags and they kill our people."

The Taliban drift into Karachi actually began years ago, though much more quietly. Many fled here after a concerted Pakistani military operation in the Swat Valley in 2009. The influx has gradually continued, officials here say, with Taliban fighters able to easily melt into the city's population of fellow ethnic Pashtuns, estimated to number at least 5 million people.

Until recently, the militants saw Karachi as a kind of rear base, using the city to lie low or seek medical treatment, and limiting their armed activities to criminal fundraising, like kidnapping and bank robberies.

But for at least six months now, there have been signs that their timidity is disappearing. The Taliban have become a force on the street, aggressively exerting their influence in the ethnic Pashtun quarters of the city.

Taliban tactics are most evident in Manghopir, an impoverished neighborhood of rough, breeze-block houses clustered around marble quarries on the northern edge of the city, where illegal housing settlements spill into the surrounding desert.

In interviews, residents describe Taliban militants who roam on motorbikes or in jeeps with tinted windows, delivering extortion demands in the shape of two bullets wrapped in paper.

A factory owner in Manghopir, speaking on the condition of anonymity out of fear for his safety, said Pashtun businessmen had received demands for $10,000 to $50,000. The figure was negotiable, he said, but payment was not. Resistance could result in an assault on the victim's house or a bullet to the head.

Khan said he had not dared to visit his constituency in months. "There is a personal threat against me," he said, speaking at the headquarters of his party, the Muttahida Qaumi Movement, which represents ethnic mohajirs, in the city center.

The militant drive has even distressed Manghopir's most revered residents: the dozens of crocodiles who inhabit a pool near a Sufi shrine here.

The Muslim pilgrims who come here to pay homage to the shrine's saint have long also brought scraps of meat for his reptile charges.

But lately, as visitor numbers have dwindled from hundreds per day to barely a few dozen, the roughly 120 crocodiles here have grown hungry, according to the animals' elderly caretaker.

Police officials, militant sources and Pashtun residents say three major Taliban factions operate in Karachi - the most powerful one, which is rooted in South Waziristan and dominated by the Mehsud tribe, and two others from the Swat and Mohmand areas.

A senior city police officer, speaking on the condition of anonymity, said militant commanders with those factions send operational orders to Karachi from the tribal belt, while some captured militants have tried to justify their activities by citing the authorization of religious clerics in the northwest.

In cases, he added, regular criminal groups have posed as Taliban fighters, in a bid to increase their power of intimidation.

Just why the Taliban are adopting such an aggressive profile in Karachi right now is unclear. Some cite the greater number of militants fleeing Pakistani military operations in the northwest; others say it may be the product of dwindling funds, as jihadi donors in the Persian Gulf states turn elsewhere, to the Middle East.

In any event, it has shaken the city's bloody ethnic politics.

Since the 1980s, armed supporters of the mohajir-dominated Muttahida Qaumi Movement have engaged in tit-for-tat violence with those of the Pashtun-dominated Awami National Party. In the worst periods, dozens of people have died in a day. Now, faced with a common foe, figures in both parties say they have declared an unofficial truce.

As well as the attack on the Awami party - which have seen it close 44 of its district offices across the city - the Pakistan Taliban claimed responsibility for two attacks on the MQM - first, a bombing that killed four people, then the assassination of a party parliamentarian.

In a recent interview with The New York Times in North Waziristan, the Taliban spokesman Ehsanullah Ehsan said the group was targeting both parties - as well as President Asif Ali Zardari's Pakistan Peoples Party - for their "liberal" policies.

The security forces, shaken out of complacency, have begun a number of major anti-Taliban operations. The latest of those occurred March 23 when hundreds of paramilitary Rangers raided a residential area in Manghopir, near the crocodile shrine, confiscating a cache of more than 50 weapons and rounding up 200 people, 16 of whom were later identified as militants and detained.

"I don't think the Taliban would like to set Karachi aflame, because they fear the reaction against them," said Ikram Seghal, a security consultant in Karachi. "The police and intelligence agencies have very good information about them."

Promoted
Listen to the latest songs, only on JioSaavn.com
Other factors limit the Pakistani Taliban's ingress into Karachi. One of the more provocative ones is that allied militants - particularly the Afghan Taliban - might not like the added publicity. The Afghan wing has long used the city as place to rest and resupply. There are longstanding rumors that the movement's leader, Mullah Muhammad Omar, is taking shelter here.

In such a vast and turbulent city, the Taliban may become just another turf-driven gang. But without a determined response from the security forces, experts say, they could also seek to become much more.
© 2013, The New York Times News Service