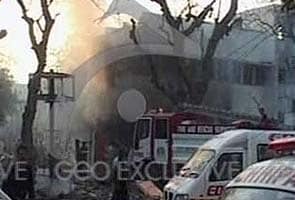 Islamabad: A Taliban suicide bomber rammed a truck laden with over 100 kg of explosives into the headquarters of the paramilitary Pakistan Rangers in Karachi on Thursday, killing at least two security personnel and injuring over 20 others.

The attacker slammed the truck into the gate of the Pakistan Rangers office in North Nazimabad area of Karachi at about 7 am.

The powerful explosion, which was heard across the country's largest city, caused extensive damage to the building and a section of it collapsed.

Two Pakistan Rangers personnel were killed in the attack, officials were quoted as saying by TV news channels. Over 20 people were also injured in the blast.

Officials of the bomb disposal squad said over 100 kg of explosives were used in the attack.

The explosion triggered a fire in the Pakistan Rangers building that was put out after about 90 minutes.

Footage on television showed a column of smoke rising into the sky. The blast also damaged several nearby buildings.

"We have found body parts, which suggests it was a suicide attack. A vehicle laden with explosives hit the gate of the building," Leghari told the media.

He said police had been alerted by intelligence agencies about possible attacks by terrorists to destabilise Karachi though there was no information about specific targets.

The injured were taken to two nearby hospitals, where doctors said four paramilitary personnel were in a serious condition.

Security personnel detained two men who were filming the injured with mobile phones at a hospital.

The attack occurred a day after Prime Minister Raja Pervez Ashraf inaugurated an international defence exhibition in Karachi that is being attended by dozens of foreign delegates.

However, Sindh Police chief Leghari said the site of the attack was far away from the venue of the exhibition.