"Take it to Mr. Trump, please, and tell [him] that we make it with our hearts, please," the woman calls out to MIke Pompeo, even as security agents intervene to escort her offstage. 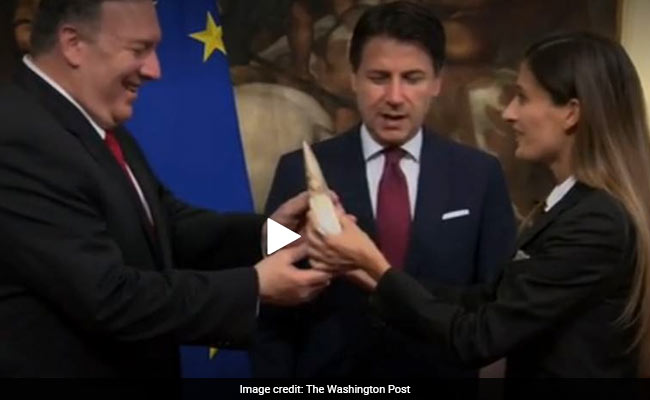 It seemed like a normal photo opportunity for Secretary of State Mike Pompeo and Italian Prime Minister Giuseppe Conte.

Then a woman interrupted with a hunk of nicely aged cheese and a message for President Donald Trump.

"I have a present for you - an Italian present. The prime minister knows what I am talking about. This is Parmigiano-Reggiano, and this is what we make best in Italy," video footage of the event shows Alice Martinelli saying, as Pompeo beams and graciously accepts the pound and a half of authentic Italian cheese.

But Conte appears entirely unamused. "May I ask the lady to step aside, please?" he said.

"I'd be grateful if you could also help," she appears to say back to him.

"Take it to Mr. Trump, please, and tell [him] that we make it with our hearts, please," she calls out to Pompeo, even as security agents intervene to escort her offstage.

Martinelli, a journalist with Italy's satirical "Le Iene" show, later explained to The Washington Post that she was there to deliver a message: Italian dairies are worried about Trump's looming tariffs on European food products, including wine and cheese, that would cost billions of dollars.

And Italy takes its cheese seriously: Parmigiano-Reggiano is carefully produced under strict regulations at 330 dairies in Italy.

"My gesture was all about tariffs," Martinelli said in a phone call with The Post on Tuesday evening.

She packed the cheese in her bag ahead of the photo op Tuesday, she said, along with her black suit - the signature outfit for "Le Iene" comedic reporters. She passed through an X-ray machine on her way into the event, but the cheese didn't set off any red flags - that is, until she was up close to Pompeo, handing it directly to him.

And she seemed to think that on Pompeo's end, at least, her message was well received.

"He actually seemed very happy about it - he was laughing the whole time," she said.

As for Conte? He made a bit of a stink.

He grabbed the cheese from Pompeo and handed it off to an aide. "Let me explain, this is the way to prove you're Italian," he said, as Pompeo giggled in the background. "Let me do the work of the president of the council. . . . You, step outside," he called after Martinelli in Italian.

Then he made a quick recovery as he turned back to Pompeo.

"It's a good one," he said, pointing toward the cheese.

"I have no doubt," Pompeo replied, patting his stomach as the two shared a laugh.

(Except for the headline, this story has not been edited by NDTV staff and is published from a syndicated feed.)
Comments
cheeseMike PompeoDonald Trump