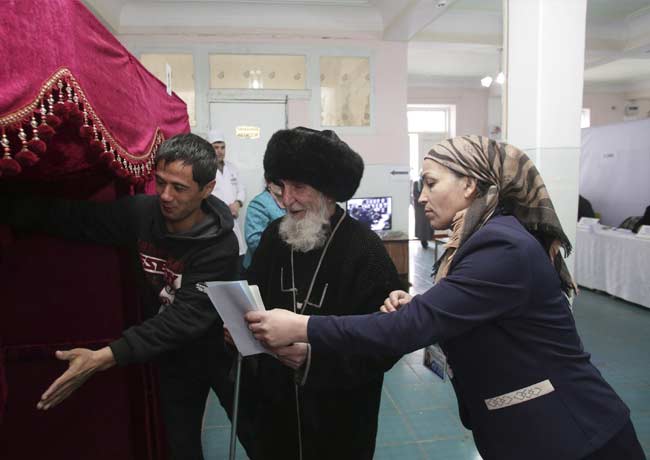 A blind elderly man gets help while being led to a voting booth to mark his ballot during a parliamentary election at a polling station in the Tajik capital Dushanbe on March 1, 2015. (Reuters)

Dushanbe:
Tajikistan voted today to elect a new parliament that will likely be dominated by the party of President Imomali Rakhmon who has ruled the Central Asian nation since 1992 and is backed by Moscow, which has thousands of troops stationed there.
Rakhmon, a 62-year-old former head of a Soviet state farm, extended his rule by seven years in an election held in November 2013.
With Moscow's political and military support, Rakhmon's secular government defeated Islamist rebels in a 1992-97 civil war which killed tens of thousands. There is only a small and disparate opposition.
The People's Democratic Party of Tajikistan, founded and chaired by Rakhmon, has 55 members in the 63-seat Assembly of Representatives, the lower chamber of the Tajik parliament elected in 2010.
On a warm and sunny morning, voters thronged to polling stations in the capital Dushanbe. They are to choose from a list of eight political parties running nationwide and 185 candidates to be elected in single-mandate districts.
"I voted for the president's party," Maksuda Kurbanova, a 63-year-old medic, told Reuters after casting her ballot at a polling station. "I want a better life, and may Tajikistan never see a civil war again."
Russia keeps about 6,000 troops in Tajikistan, which borders Afghanistan and China. This isMoscow's biggest deployment of land forces abroad. More than 1 million Tajiks work in Russia, propping up the rickety economy with their cash remittances.
The Islamic Revival Party of Tajikistan (IRPT), which includes many of former wartime fighters, poises the biggest challenge for Rakhmon's party, although it won only two seats in the national parliament in the last election.
"We will certainly be in parliament," IRPT head Muhiddin Kabiri said after voting. "We hope our party will have its own faction, if this election is transparent, of course." To form a faction, a party must have at least five deputies in parliament.
Tajikistan's previous elections have been criticised by Western rights groups and governments for lacking in freedom.
In the run-up to today's poll, a senior member of the opposition IRPT was arrested and charged with illegal possession of firearms, the Organisation for Security and Cooperation in Europe (OSCE), which is monitoring the election, said an interim report.
Aziz Shodmonov, a 50-year-old construction worker, came to vote together with his wife and two children. "I want a better future for our people, and may life be not that expensive."
Aziz works in Russia. Like many of his compatriots, he has spent the winter at home and will fly back to Russia this week.
But as an economic crisis spreads across sanctions-hit Russia, many of the migrant workers may lose their jobs and will have to return to Tajikistan, which could lead to trouble.
"This strongman-style form of Rakhmon's leadership would be still tolerated in a good economic environment, but as long as life is getting worse, a return of a large number of disgruntled workers may threaten him with social unrest," said Alexander Knyazev, a Kazakhstan-basedCentral Asia analyst.
There are 4.3 million eligible voters in the nation of 8 million. Polls opened at 8 am (local time) and will close at 8 pm (local time). Results are expected to come tomorrow morning.
© Thomson Reuters 2015
Promoted
Listen to the latest songs, only on JioSaavn.com