For a week after Nancy Pelosi's visit, China sent warships, missiles and fighter jets into the waters and skies around Taiwan. 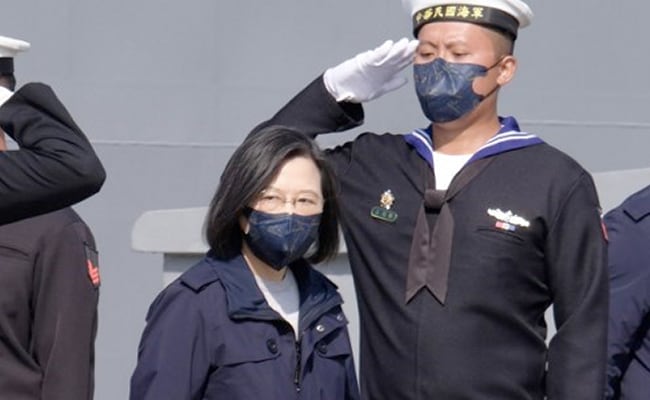 Taiwan said Wednesday it would exercise its right to self-defesce and "counter-attack" if Chinese fighters and warships were to enter its territorial space, in the wake of Beijing's huge military drills around the island.

The self-ruled, democratic island lives under constant threat of an invasion by China, which claims it as part of its territory to be seized one day -- by force if necessary.

Tensions in the Taiwan Strait have soared to their highest level in decades after China staged an unprecedented show of force in retaliation for US House Speaker Nancy Pelosi's visit to Taipei earlier this month.

For a week after Pelosi's visit, China sent warships, missiles and fighter jets into the waters and skies around Taiwan, which condemned the drills and missile tests as preparation for an invasion.

Asked how Taiwan would respond if Chinese warplanes and naval ships entered its territorial air space and waters, a defence official said "the closer the incursions are to Taiwan, the stronger our countermeasures will be".

"We will use naval and air forces and coastal fire to repel PLA (Chinese People's Liberation Army) forces that enter our 24-nautical-mile or 12-nautical-mile zones," said Major General Lin Wen-huang, director of operations and planning division.

"When the PLA aircraft and ships are in our 12-nautical-mile territorial sea and air space, we will act in accordance with operatiorders to exercise the right of self-defensce to counter-attack," he said at an online news briefing.

Drone incursions have increased at the same time as Beijing's drills earlier this month, some surveilling military outposts.

The military will determine "whether to engage the target and exercise the right of self-defence to counter-attack", if the drones fail to leave after warnings, President Lin said.

It is not clear who is flying the drones from the Chinese mainland.

Kinmen lies just a few kilometres off China's coast, meaning a civilian could feasibly fly a commercial drone that distance.

However, China has also stepped up so-called greyzone tactics against Taiwan in recent years, including the drone incursions.

"Greyzone" is a term used by military analysts to describe aggressive actions by a state that stop short of open warfare and can use civilians.

China has also ramped up incursions by warplanes into Taiwan's air defence identification zone. Taiwan's ADIZ is much larger than its airspace. It overlaps with part of China's ADIZ and even includes some of the mainland.