Syrian Girl, 8, Born With No Legs, Finds Hope In Turkey

Maya, originally from Aleppo region, had until her sudden transfer to Istanbul been living with her father at a camp for displaced people in the Idlib region of northern Syria, victims of Syria's over seven year civil war. 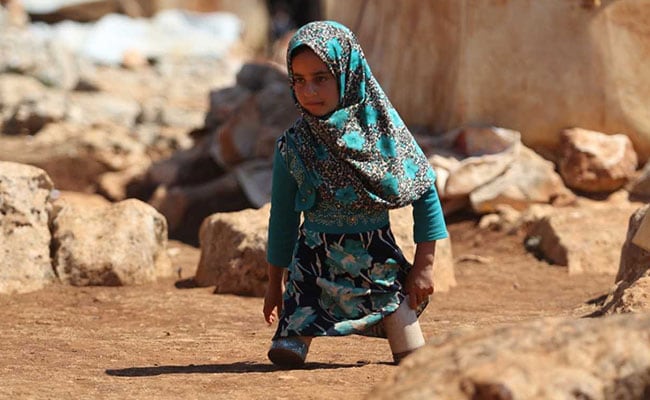 Maya, like her father, had been able to move around more easily by crawling. (AFP)

Earlier this month, Maya Merhi, 8, who was born with no legs due to a congenital condition, was moving around a Syrian displaced persons camp on artificial limbs made of plastic tubing and tin cans.

But after pictures of her plight, including those taken by AFP in Syria, were seen around the world, she was brought to Istanbul for treatment. And her life should be about to change.

Maya, originally from Aleppo region, had until her sudden transfer to Istanbul been living with her father at a camp for displaced people in the Idlib region of northern Syria, victims of Syria's over seven year civil war.

Her homemade prosthetics had been cobbled together by her father Mohammad Merhi, 34, who also shares the same disability known as congenital amputation which means the person is born without lower limbs.

'Sitting in the tent'

After the pictures of her shuffling with difficulty around the refugee camp made a huge impact across the world, the Turkish Red Crescent intervened.

The father and daughter were evacuated from Syria by the Turkish authorities and brought to Istanbul for treatment at a specialised clinic.

They had been living in the countryside of the south of Aleppo region but had to leave for Idlib at the start of the year as fighting began to rage in their native region.

Maya, like her father, had been able to move around more easily by crawling. But recent surgery, which further reduced the length of her limbs had impeded this.

"After the operation, she was not able to move around and was sitting the whole time in a tent," Mohammad told AFP in an interview at the Istanbul clinic.

"In order for her to move out of the tent, I had the idea to fix on her limbs tubing, stuffed with a spongy material to reduce the pressure.

"Then, I added two empty cans of tuna because the plastic was not strong enough to resist the friction with the ground."

With these impromptu prosthetics, Maya was able to walk outside of the tent and could even go on her own to the camp's school.

Mohammad, who has five other children none of whom suffer from the condition, said he replaced the plastic tubing once a month and the tins once a week.

While her father spoke to AFP at the clinic, Maya sat in his arms in his wheelchair, clearly overwhelmed by the experience of the last days.

Her father will also be given prosthetic legs at the Turkish clinic. But it's above all the fate of his daughter that worries him.

"It's more important that she can walk so that she is autonomous. It would be like a new life for us," he said.

"I dream of seeing her walk, going to school and back without suffering," he added.

Dr Culcu said that he had been "very touched" by the pictures of Maya walking on her tins and had decided to take on the cost of her prosthetic legs and those of her father.

"We have been contacted by people all over the world who want to make the donation. But this issue is closed and I will take on the cost," he said.

He said the homemade limbs her father had constructed in the Idlib camp were likely to prove of huge benefit because they had got her used to walking.

"We can't really call what she has prosthetics," Dr Culcu said.

"It's a kind of makeshift system for her to walk. With the energy of desperation, without any means, her father turned that suffering into hope."