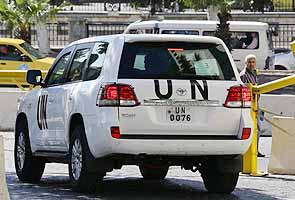 An official from the international mission overseeing the stockpile's elimination said Damascus had made an excellent start, and the United States acknowledged its rapid compliance with a U.N. resolution on destroying chemical weapons as extremely significant.

The official described Sunday's operations in which Syrian forces used cutting torches and angle grinders to render missile warheads and bombs unusable. However, he noted that this was only the start of work that is due to last until mid-2014 and requires the cooperation of all sides.

"It was an excellent first day, with the stress on the word 'first'," the official told Reuters by telephone from Damascus, declining to be named.

Assad's government, fighting a civil war in which more than 100,000 people have died, agreed to destroy the chemical weapons after a sarin gas attack on the outskirts of Damascus killed hundreds of people in August.

While the world's worst chemical weapons attack in 25 years may not be repeated in Syria, both the rebels and Assad's forces continue to kill with conventional weapons daily and foreign governments are desperate to end a conflict that risks spreading across much of the region.

Experts from the Organisation for the Prohibition of Chemical Weapons (OPCW), supported by the United Nations, aim to oversee destruction of the Syria's chemical weapons production and mixing equipment by November 1, and deal with all chemical weapons materials by the end of June 2014.

"There are milestones and tests that lie ahead, and we hope and expect to have continued cooperation of all parties to pass those milestones," the official said.

US Secretary of State John Kerry said Sunday's work was a good beginning and offered rare praise for Assad, a leader Washington insists lost legitimacy when he responded with force to protests against his rule which erupted in March 2011.

"I think it is extremely significant that yesterday, Sunday, within a week of the resolution being passed, some chemical weapons were already being destroyed," Kerry told a joint news conference with Russian Foreign Minister Sergei Lavrov at an Asia-Pacific summit in Indonesia.

"I think it's also credit to the Assad regime for complying rapidly, as they are supposed to," he said. "I'm not going to vouch today for what happens months down the road, but it's a good beginning, and we should welcome a good beginning."

Washington blamed Assad's forces for the chemical attack while Assad accused rebels of carrying it out to provoke Western intervention.

The United States and France threatened air strikes in response but stepped back from military action after Washington and Moscow agreed a framework last month for scrapping Syria's estimated stockpile of 1,000 tonnes of chemical agents.

Syrian rebels and activists have been dismayed by signs of what they see as U.S. reneging on its support for Assad's opponents - by deferring any threat of military action and then reaching a deal with the Syrian president over chemical weapons.

Susan Ahmad, an opposition activist in Damascus, said the chemical weapons agreement was a step back, not forward, in resolving the two-and-a-half year crisis.

"It is all about giving Assad more time to kill more people. And here he is, using Scud (missiles) and recruiting fighters," she said. "The international community is celebrating the victory of keeping Assad as president despite the fact that he has killed hundreds of thousands."

Kerry said he and Lavrov also spoke at length about ways to bring Syria's warring parties together for long-delayed peace talks which are now scheduled for Geneva next month.

"We re-committed today very specific efforts to move the Geneva process as rapidly as possible," he said, saying both sides would "lay the groundwork for a round of talks".

They will meet the United Nations special envoy for Syria, Lakhdar Brahimi, to finalise a date for the peace conference, he added. Brahimi said on Sunday it was not certain that the peace talks would take place in mid-November as planned.

Assad's government and the leader of the political opposition in exile have both said they are ready to attend talks but there is little sign that the differences between them could be bridged.

The opposition outside Syria, already disowned by the majority of fighters on the ground, insists the talks must focus on removing Assad and installing a transitional government.

Officials say the government will not go to Geneva to surrender powers to the rebels and Assad has dismissed negotiation with fighters or opponents who support foreign military or political intervention.

Promoted
Listen to the latest songs, only on JioSaavn.com
The war in Syria has driven 2.1 million refugees to seek shelter in neighbouring countries, according to the United Nations which predicts another million will join them by the end of the year and a further 2 million next year.