Swiss On High Avalanche Alert On Eve Of Davos Forum

A bulletin from the SLF Institute for Snow and Avalanche Research said,"Fresh snow and snow drift accumulations are prone to triggering (avalanches). Until late in the night a large number of natural avalanches are to be expected,". 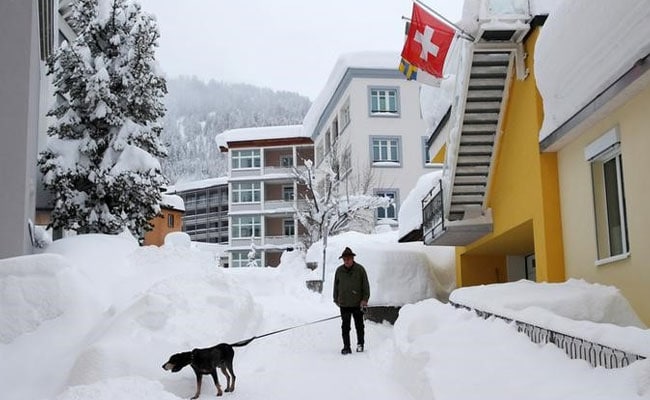 The accumulation of snow was the highest since 1999. (Reuters)

ZURICH: Switzerland went on avalanche alert on Monday as fresh snow smothered much of the Alps a day before the World Economic Forum in Davos gets under way.

A bulletin from the SLF Institute for Snow and Avalanche Research in Davos showed a broad band of the mountainous country under Level 5 avalanche danger, the highest on a 1-5 scale.

"Fresh snow and snow drift accumulations are prone to triggering (avalanches). Until late in the night a large number of natural avalanches are to be expected," it said.

Snow slides could be deep and large, it added, posing danger to exposed settlements and transit routes.

The accumulation of snow was the highest since 1999.

In Davos, where authorities have evacuated two dozen people from homes most at risk, access roads were still open as crews used controlled explosions to reduce the chance of slides. The sun was due to come back out on Tuesday.

Zermatt in southwestern Switzerland remained cut off by road and rail. A helicopter air bridge that had been ferrying people in and out of the popular ski resort was out of action because of bad weather, a town spokeswoman said.

A helicopter rescue team had to fly a pregnant woman out of the town on Elm in Glarus canton where snow drifts had cut off roads as she went into labour.

Promoted
Listen to the latest songs, only on JioSaavn.com
At lower elevations steady rain was causing local flooding.
© Thomson Reuters 2018