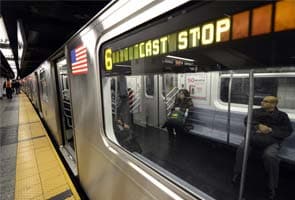 New York: The toll of death and suffering from superstorm Sandy mounted on Thursday even as New York struggled back to life, with the first subway trains rolling in four days.

New York mayor Michael Bloomberg said Sandy killed at least 37 people in the city and the number was likely to mount. At least 85 people have now been reported dead across the 15 states hit by the hurricane on Monday night.

Fuel shortages led to long lines of cars at filling stations in many states and the country faced a storm bill of tens of billions of dollars.

More bodies are being found as police and fire-fighters continue "their lifesaving mission, going block-by-block and door-to-door in the areas devastated by the hurricane," Bloomberg said.

With about 650,000 people still without power in New York, Bloomberg said the city would start handing out food and water and that National Guard and police would go into high-rise buildings to help the elderly.

The Con-Edison power company said that some New Yorkers would have to wait until November 11 before electricity is restored.

Hoboken authorities estimated on Wednesday that 20,000 people were stuck in their homes and high-wheel military trucks were brought in to reach stricken houses and apartment blocks.

The floodwaters receded slowly, leaving behind desolation. A yacht, thrown up by the storm, blocked one street near the Hoboken ferry terminal.

New Jersey, which President Barack Obama visited on Wednesday, emerged as the state with the most widespread destruction. At least 12 people were reported dead in the state, and many isolated districts were still being searched.

Some 1.8 million people in New Jersey were still without electricity three days after the storm and fuel shortages were becoming critical, with huge queues of cars at the rare gas stations open in the state.

About half of gas stations in New Jersey and the New York region had closed down because of power cuts or fuel shortages, officials said.

But the first subway trains brought some cheer to New York City.

A skeleton service started just before dawn and trains were quickly packed. Trains were to be free on Thursday and Friday. "It is not comfortable but it is a huge relief to get moving again," said commuter Dave Stetman.

On Wednesday, in a bid to avoid gridlock, Mayor Michael Bloomberg said that until Friday cars entering Manhattan must carry at least three people. Police set up checkpoints at bridges and turned back hundreds of cars.

Con Edison said that more than 200,000 Manhattan customers blacked out by an explosion at a sub-station would have power by Saturday morning.

But it said 100,000 cases of trees and other objects bringing down power lines had been reported, so full city-wide electricity restoration would take until November 11.

Some heartbreaking stories have emerged from the storm.

Two brothers, aged two and four, were swept from their mother's arms in the floods as the family tried to escape the rising seas in Staten Island in the New York suburbs.

Glenda Moore's car became stuck in the water and she was carrying the boys to seek help when they were swept away, the New York Post said. Police said they were still looking for the boys, Connor aged four and Brandon aged two.

Others victims were electrocuted or drowned in flooded basements. A growing number of people were killed by poisoning from the fumes given off by diesel generators put into use since the storm.

The Shell oil company said that Sandy triggered an oil spill in the waters off New York and said clean-up efforts were under way. The US Coast Guard, which is overseeing the clean-up, said refinery operator Motiva had estimated up to 300,000 gallons of diesel fuel had leaked from the plant at Sewaren, New Jersey.

Hurricane Sandy brought devastation throughout the Caribbean before hitting the United States and Canada. The overall death is now at least 157.
Comments
Hurricane Sandy