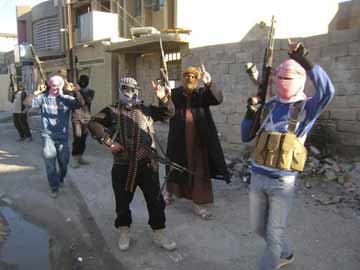 Masked Sunni Muslim gunmen patrol in the city of Falluja, 70 km west of Baghdad, on February 12, 2014.

Baghdad/Tikrit, Iraq: Sunni Islamist insurgents took over much of a northern Iraqi town on Thursday and laid siege to its town hall, weeks after militants seized a whole city from the country's Shi'ite-led government.

The mayor of Sulaiman Pek, trapped in the building, identified the gunmen as members of the Islamic State in Iraq and the Levant (ISIL), a Sunni group which was also involved in the takeover of the city of Falluja.

Government troops and tanks are still surrounding Falluja in Iraq's western province of Anbar, and have threatened to launch a ground assault to retake it unless the militants lay down their arms by Friday.

Militants including ISIL have been gaining ground in Iraq over the past year, but the government's loss of control over Falluja and now Sulaiman Pek marks a major escalation.

"We are still inside the government building in the town centre, surrounded by the gunmen. They are attacking us with rocket-propelled grenades and machineguns," mayor Talib Mohammed said.

"They are from the Islamic State of Iraq: we know them from the black flags they are flying ... We demand the government intervene to help us."

Sunni Islamist insurgents have been regaining ground in Iraq over the past year, particularly in the western province of Anbar bordering Syria, where ISIL is also active.

Sulaiman Pek, 160 km (100 miles) north of Baghdad, is a majority Sunni Arab town of around 25,000 people, with smaller Turkoman and Kurdish communities.

"We woke up this morning to mosque loudspeakers announcing that the Islamic State in Iraq and Levant is controlling the town and demanding residents leave their houses," local official Ahmed Aziz said.

"Most of the families are leaving the city fearing... a bloody battle."

More than 300,000 people have already fled violence in Anbar since militants seized Falluja on January 1 after Iraqi security forces cleared a site where Sunnis were protesting against Shi'ite Prime Minister Nuri al-Maliki.

By the end of the month, more than 1,000 people had been killed in attacks across the country, adding to intensifying violence.

On Thursday, at least six people were killed when two bombs exploded in the Shurja commercial district of Baghdad.

Maliki has appealed for international support and weapons to fight al Qaeda, but critics say his own policies towards Iraq's once-dominant Sunni community are at least partly to blame for reviving an insurgency that had peaked in 2006-07.

Some tribes in Sunni-dominated Anbar support ISIL against Maliki's Shi'ite-led government. Others deplore ISIL's violent tactics and have joined forces with the army.

The deadline for a government peace initiative expires on Friday.

"Everybody carrying arms against us after the deadline is over will be considered an enemy, and we will keep chasing al Qaeda terrorists in Falluja until we eliminate them all," Anbar governor Ahmed Khalaf said in a statement.

Militants who have joined forces with ISIL will be offered amnesty if they lay down their arms by Friday, the governor said, promising to reward those who helped the government fight militants with jobs.

A tribal fighter who prevented Iraqi troops from entering Falluja said the government had failed to keep previous promises to repay the tribes of Anbar for fighting al Qaeda in 2006-07.

"Why should we trust the governor? He's backed by Maliki and we have a bitter history with this man," he said.

The governor also said legal proceedings and arrest warrants issued against Sunni anti-government protesters would be dropped unless they were implicated in "terrorist" activities.

Finally, the army, whose rank and file are drawn from Iraq's Shi'ite majority and are deeply mistrusted in Sunni-dominated Anbar, would withdraw, leaving the locally-recruited federal police to re-impose law and order.

Local officials say there is little if any chance the initiative will succeed.

"We are still hoping for peace to prevail, but facts on the ground say a military solution is closer," said the head of Anbar provincial council Sabah Karhout.

The army has intensified shelling of Falluja in recent days, and hospital officials said they had received six bodies on Wednesday, including those of two boys.

"It's horrible here in Falluja. Thousands of families have left. Innocent people get killed every day for nothing," said a tribal leader who asked not to be named because he feared reprisals from militants.

"Al Qaeda should leave us alone. This tragedy must stop now."

Iraqi security officials said they were sealing off the city to prevent militants from entering or leaving, and would give passage only to families, fuel trucks and humanitarian aid.

"I am particularly concerned about the rapidly deteriorating conditions in Falluja, where many residents are caught up in the fighting," United Nations envoy to Iraq Nikolay Mladenov said in a statement.

Promoted
Listen to the latest songs, only on JioSaavn.com
"I call on all sides to address the causes of violence through dialogue and the political process and to help rebuild Anbar."