China banned all forms of surrogacy -- both commercial and altruistic -- in 2001 due to concerns poor women were being exploited. 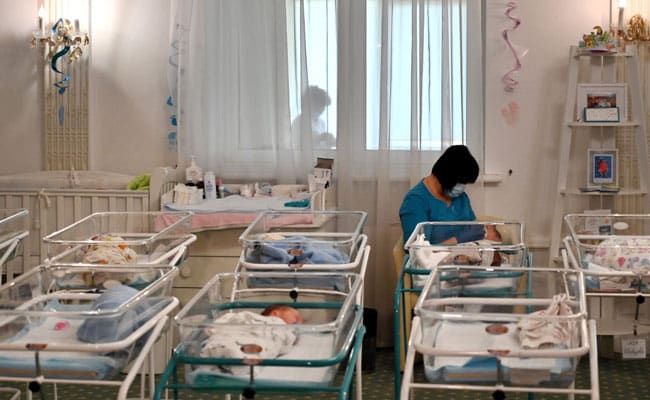 Cherry Lin wistfully strokes a babygrow, fretting it may be too small for a son she is yet to meet -- one of hundreds of Chinese mothers estranged from babies born to commercial surrogates overseas after the coronavirus forced border closures.

China banned all forms of surrogacy -- both commercial and altruistic -- in 2001 due to concerns poor women were being exploited.

But for $35-75,000 couples can seek women abroad, from Laos and Russia, to Ukraine, Georgia and the US, to carry their babies.

The system has been tipped into chaos by the pandemic, which has seen borders closed, flights cancelled and visas pulled, creating a 'pile-up' of newborns waiting to be picked up by their biological Chinese parents.

It has also revived the black market for surrogacy inside China.

'Baby dens' with dozens of newborns in orphanages or apartments have been found as the backlog builds, according to surrogacy agencies in Russia and Ukraine.

"I can't sleep at night thinking my baby is stuck in an orphanage," Lin, who opted for surrogacy after suffering several miscarriages, told AFP from southern city of Chengdu.

Her baby was born in St Petersburg in June, three months after Russia closed its border with China to curb the spread of the coronavirus.

"We don't know how long we have to wait," she concedes.

Rising incomes, high rates of infertility and the desire for older couples -- well past their reproductive age -- to have a son after China scrapped its one-child rule in 2016 has fuelled the demand for foreign surrogates.

Lin, a 38-year-old lawyer, and her husband travelled to Russia last year for IVF and to sign a contract with a surrogacy company.

Once the pregnancy was confirmed she shopped for baby products, and even took an infant first aid course.

But her plans unravelled as the virus swept the globe, dropping her into "a nightmare", where she receives fragments of her newborn's first weeks through photos and video clips sent by the surrogacy agency.

China's foreign ministry and the Russian embassy in Beijing did not respond to AFP queries about what they were doing to help Chinese parents bring their babies home.

But on Tuesday, Anna Mityanina, in charge of children's rights in Saint-Petersburg where many babies are blocked, said authorities were considering "providing visas and organising a humanitarian flight from Beijing so that Chinese parents can come and pick up their children."

There are no official figures on how many Chinese babies born to surrogates are stranded abroad.

But a video posted in June by surrogacy service BioTexCom in Ukraine showing rows of babies in cribs in a hotel pointed to the scale of the crisis.

Nearly half of the 46 babies belonged to Chinese clients, a BioTexCom spokesperson told AFP.

Authorities have since issued special permits for biological parents to claim their children despite border closures.

But that is not enough for Li Mingxia, whose son was born in May in Kiev.

Quarantine requirements and infrequent flights means she is still unlikely to reach him until late November.

"I will miss the first six months of his life," Li explains, adding: "I can't get that back."

Most babies born abroad do not have birth certificates since their parents are unable to travel to take the DNA tests needed to prove parentage.

Russian and Ukranian police have also started raiding the baby dens -- apartments where five or six undocumented babies are being looked after by one nanny -- amid fears of human trafficking, Russian state media reported.

"When the police find several Chinese babies without any identification papers, living in a house with a stranger it looks like you are selling babies for organ harvesting," according to Dmitriy Sitzko, China Marketing Manager for Vera Surrogacy Center in Saint Petersburg, who worked with Lin.

Lin's agency found a spot at a state-run orphanage to care for her baby for free.

Nearly one in four couples of reproductive age in China suffer from infertility, according to the Global Burden of Disease study published in medical journal The Lancet in 2017.

Some studies have linked high levels of pollution to declining male fertility, while women are choosing to delay motherhood due to the high costs of living, restrictive maternity policies, and high childcare costs.

Surrogacy is sometimes chosen when fertility treatments, such as IVF, don't work for the couple or if they are unable to carry a child.

Stars such as Elton John, Cristiano Ronaldo, Nicole Kidman, and Kim Kardashian West, have said they used surrogates to expand their families, raising the profile of the practice -- but it remains controversial.

The UN has warned commercial surrogacy risked turning children into "commodities" and called for better regulation in places where it is legal.

"There is no right to have a child under international law. Children are not goods or services that the State can guarantee or provide. They are human beings with rights," Maud de Boer-Buquicchio, Special Rapporteur on the sale and sexual exploitation of children, said in a 2018 report.

Only a handful of countries allow international surrogacy.

Russia and former soviet countries including Ukraine, Georgia and Belarus are the top destinations for Chinese couples looking for a birth mother.

The sector was displaced from Asia, with Laos the only remaining nation to allow international surrogacy after Thailand and India -- long time hotspots -- banned it.

Even in Russia and Ukraine a backlash against foreign surrogacy is building with politicians and activists warning that women and children are being exploited by wealthy foreigners.

But as global travel restrictions have brought the industry to a halt, people are instead turning to the local black market.

Shenzhou Zhongtai, an agency in the southern city of Gaungzhou, told AFP that it costs 600,000 yuan ($87,000) for "successful transplanting and delivery."

Army officers, communist party cadres or judges who can't travel abroad because of their sensitive jobs are the main clients for China's underground surrogacy agencies that go unpunished because of their official connections.

"If there are any legal problems, we can fix it," said Ye Danni, an agent for Laos Baby International Reproductive Clinic that had to pause their operations abroad due to travel restrictions.

Lin, who gave up her law practice to have a baby, says she was too afraid to turn to the Chinese black market -- but the pandemic has made her rue that choice.

She says: "If I'd taken that risk, I'd be holding my baby today."