Stormy Daniels is suing Trump, who denies the fling, to invalidate a non-disclosure agreement made days before the 2016 presidential election that prevents her from discussing the case. 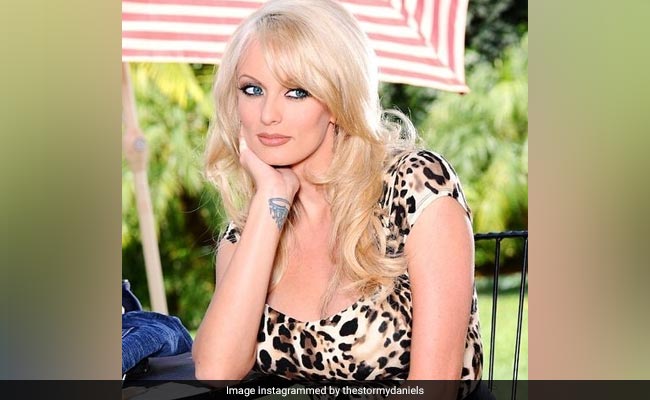 Los Angeles: Stormy Daniels was granted the keys to the Californian city of West Hollywood on Wednesday to celebrate her court battle with President Donald Trump over a sexual encounter she claims they had more than a decade ago.

"This community has a history of standing up to bullies and speaking truth to power, and I'm so lucky to be a part of it. I am elated and honored."

Daniels, 39, was being celebrated for her "leadership in the #RESIST movement," said officials in West Hollywood, who proclaimed "Stormy Daniels Day" at the raucous presentation.

"Out of all the chaos of the Trump administration, our own Lady Godiva appeared on horseback," West Hollywood mayor John Duran said.

"And as you know, Lady Godiva rode naked through the streets of England to protest injustice and taxes, and we have our own Lady Godiva here in the city of West Hollywood."

Duran praised the adult movie actress for bearing the "slings and arrows" of attacks not just from everyday detractors, but from "the most powerful person on the planet."

"And she's held her head up with dignity and she fought back," he said, adding that Daniels and her lawyer Michael Avenatti were leading a struggle for all Americans "to get our country back."

Daniels, real name Stephanie Clifford, told CBS's "60 Minutes" in March she had unprotected sex with Trump once in 2006, and was threatened by a man in a parking lot in Las Vegas when she sought to sell her story five years later.

The experience left her shaking in fear and afraid she would drop her infant daughter, she told anchor Anderson Cooper.

"In these politically tumultuous times, Daniels has proven herself to be a profile in courage by speaking truth to power, even under threats to her safety and extreme intimidation," said a statement from the city, which lies wholly within the Los Angeles built-up area.

The disclosure capped a series of contradictory statements from Trump and his representatives on the scandal swirling around Cohen -- which has widened to ensnare major corporations and a Russian oligarch.

The president initially denied all knowledge of the payment, which Cohen has acknowledged was intended to stop her from going public.

Promoted
Listen to the latest songs, only on JioSaavn.com
Daniels' lawsuit has been put on hold by a judge for 90 days while Cohen faces a federal criminal investigation in New York.

(Except for the headline, this story has not been edited by NDTV staff and is published from a syndicated feed.)
Comments
Stormy DanielsDonald TrumpStephanie Clifford