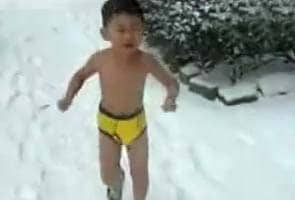 Beijing: A home-filmed video showing a four-year-old Chinese boy being forced by his parents to run almost naked through the snow in bitterly cold New York has gone viral and sparked an online uproar.

The father was trying to train his son to be strong, his personal assistant said, but the footage has sparked debate about "Chinese" tough parenting -- as famously illustrated by Chinese American "Tiger Mother" author Amy Chua.

In the video, the little boy runs towards his father, who is filming him, in thick snow with only his shoes and underpants on, at times crying bitterly and pleading with his dad to take him in his arms.

On several occasions, both parents tell their son to lie down in the snow, which he does eventually when his mother presses him.

The film -- posted online by his father, surnamed He, who comes from the eastern city of Nanjing -- has been viewed by tens of thousands of people on various video-sharing websites and has caused outrage.

"I don't agree with this... We should give children a happy childhood, those terrible parents say they do this for their child's own good, but I think their purpose is just to be able to brag in the future," one netizen said.

"I really don't support this, poor kid, does the kid's mother let the father do whatever he wants to do?" another person said on Sina's popular weibo microblogging service.

He has been given the nickname of "Eagle Dad" in reference to Chua, who sparked controversy when she wrote a book extolling the benefits of tough parenting.

His personal assistant, surnamed Xin, told AFP He was on holiday with his family in New York during the Lunar New Year holiday last month, and decided to see in the Year of the Dragon with this unusual method.

"The child agreed and before the run, he did half an hour of slow running to warm up," she said by phone.

"This child has received all sorts of forms of training since he was small. When he was one, he started swimming in water that was 21 degrees Celsius."

Xin said that the boy was born prematurely with several health problems including water in the brain that prompted doctors to say he may have cerebral palsy.

"But now he has no problems," she said, attributing this to He's intense education method.

One person on Sina's weibo said teaching one's child about the cold and fortitude was a good thing.

"But if this method becomes a feature of everyday life, then the child's life learning process is just cruel."

Xin said He had disregarded the flood of online criticism.

"He says he doesn't care what others say... that the fact that the child lived showed that he has tenacious vitality," she said.

Promoted
Listen to the latest songs, only on JioSaavn.com
Tough "Chinese" parenting methods have come under the spotlight recently, as children are increasingly forced to study hard at the expense of leisure activities to succeed in a job market that has become hugely competitive.