Emergency In Canada's Ottawa Over Truckers' Protest Against Covid Jabs

The protesters, who first reached the Canadian capital on January 29, have parked their trucks on streets and put up tents and temporary shacks -- paralyzing the city, to the mounting frustration of many residents. 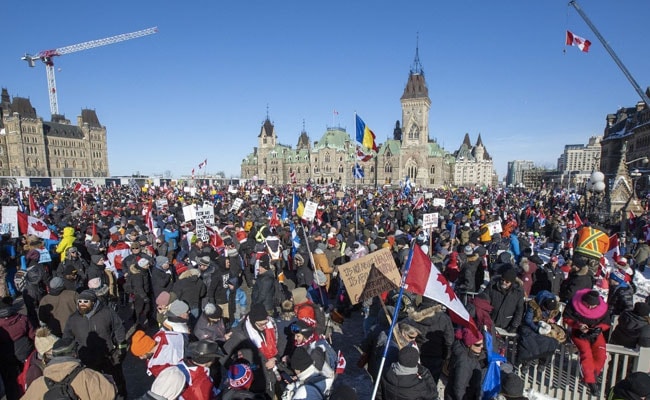 Ottawa Mayor Jim Watson has earlier described the protests as "completely out of control".

The ongoing truckers' protest in the Canadian capital is "out of control," the Ottawa mayor said Sunday, announcing a state of emergency as the city center remained blocked by opponents of anti-Covid measures.

The protesters, who first reached the capital on January 29, have parked their big rigs on city streets and put up tents and temporary shacks -- paralyzing the capital to the consternation of officials and the mounting frustration of many residents.

Mayor Jim Watson announced a state of emergency that "reflects the serious danger and threat to the safety and security of residents posed by the ongoing demonstrations and highlights the need for support from other jurisdictions and levels of government," a statement from the city said.

Earlier in the day, Watson had described the situation as "completely out of control," adding that the protesters "have far more people than we have police officers."

"Clearly, we are outnumbered and we are losing this battle," he told CFRA radio. "This has to be reversed; we have to get our city back."

Watson called the truckers "insensitive," as they have continued "blaring horns and sirens and fireworks, and turning it into a party."

The demonstrations began as protests by truckers angry with vaccine requirements when crossing the US-Canadian border, but have morphed into broader protests against Covid-19 health restrictions and the government of Prime Minister Justin Trudeau.

Locals have complained of the ceaseless sound of air horns and of being harassed, insulted or blocked by the protesters.

The truckers and their supporters have dug in, however, saying the protests will continue until the Covid-related restrictions are lifted.

Police on Sunday announced new measures to stop people from helping the protesters keep up their sit-in.

"Anyone attempting to bring material supports (gas, etc.) to the demonstrators could be subject to arrest," the force tweeted.

Similar, if smaller, demonstrations hit the cities of Toronto, Quebec and Winnipeg on Saturday. Police in Quebec said some 30 big trucks were blocking a major artery and had been warned they would face fines if they did not move soon.

In an emergency meeting Saturday with Ottawa officials, police chief Peter Sloly complained that he lacked the resources to end what he called a "siege," and asked for reinforcements.

Ottawa police are due to soon be reinforced by some 250 Royal Canadian Mounted Police -- a federal force.

"This group is a threat to our democracy," city council member Diane Deans said of the protesters on Saturday. "What we're seeing is bigger than just a city of Ottawa problem, this is a nationwide insurrection. This is madness."

The police said Sunday that they had issued some 450 tickets since Saturday morning, for a variety of mostly minor infractions including excessive noise and use of fireworks, though one truck that turned out to be stolen was seized.

In addition, it said, the police are "actively working with Canadian, US and international security agencies/authorities to investigate email-based threats to public officials."