"Stand With Us": Ukrainian Mountaineer Unfurls Flag On Mount Everest

Antonina Samoilova's first updates on the war came from a Kyiv bomb shelter where her sister was hiding. She made her way to the top of Everest, days without contact with her father and brother. 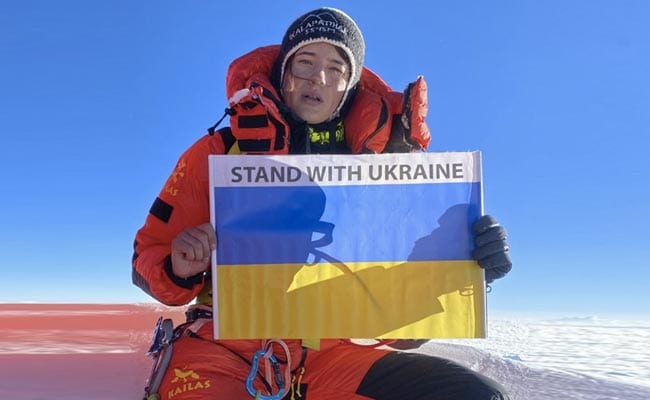 Her first updates on the war came from a Kyiv bomb shelter where her sisting was hiding.

On the roof of the world, Antonina Samoilova held up a blue and yellow panel emblazoned "Stand With Ukraine" while her father and brother were serving in the army defending their country against Russia's invasion.

The 33-year-old had tears in her eyes as she unfurled the Ukrainian flag on the summit of Mount Everest last week, she said today after returning to Kathmandu.

The world's attention was turning away from her country's plight following Russia's invasion, she worried.

"It is a pity... it's not good for us Ukrainians because we need more help, we need all the world to help us," she told AFP. "It's not yet over in Ukraine.

"I knew already before the expedition that I am the only Ukrainian on Everest this year. That made me push myself to go to the summit because I knew if it's not me, then who?" she said.

Ms Samoilova was at the summit of Pico de Orizaba, Mexico's highest mountain, in February when news of the Russian invasion reached her.

Her first updates on the war came from a Kyiv bomb shelter where her sister was hiding.

As she made her way to the top of Everest, days without contact with her father and brother who have volunteered to fight were weighing on her mind.

On her return, she learned that their region had been quiet. "I was like 'Whoo! Thank god!'" she said.

And her phone buzzed with hundreds of messages of support from friends and strangers once she reached base camp.

"Tonia, you are not only our pride, you are the pride of all Ukraine," her father said in a text.

Nepal has issued 319 permits to foreign mountaineers, each accompanied by at least one guide, for this year's Everest spring climbing season, which runs from mid-April to the end of May.

The country only reopened its peaks to mountaineers last year after the pandemic shut down the industry in 2020.

A rare window of good weather has already allowed more than 450 climbers and guides to reach the Everest summit since a team of Nepali climbers opened the route on May 7, bringing relief to expedition operators.

At least three climbers, a Russian and two Nepalis, have died on Everest since the season began.

Ms Samoilova is aiming to join the select club of climbers to scale the Seven Summits -- the highest mountains on each continent -- and has already completed Kilimanjaro in Africa, Europe's Elbrus and Antarctica's Mount Vinson.

But first, she plans to see her sister and nephew, who have escaped to Croatia, before driving back to her father and brother in Ukraine.