Residents said that if the man had entered the church building which had two floors and then had about 500 worshipers inside, the number of deaths would have been higher. 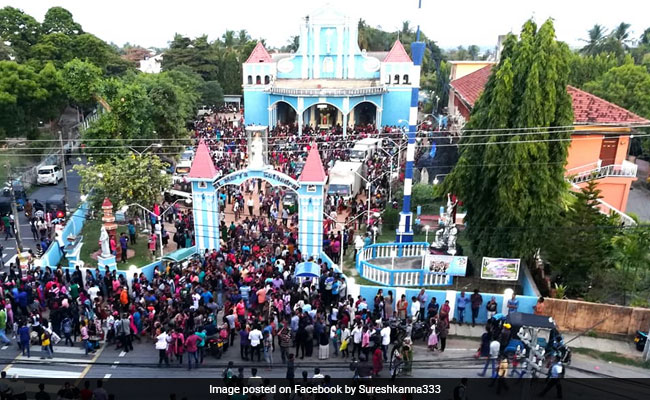 When the bomber learnt the mass St Mary's Catholic Cathedral had ended, he went to another smaller church

The suicide bomber who blew himself up at the Zion Church in Sri Lanka's Batticaloa town had intended to target another church before realising that the Easter mass there had already ended.

A total of 29 people, including 14 children, were killed in the suicide bombing in the Zion Church in the eastern town of Batticaloa, a former Tamil Tiger bastion, on Easter Sunday.

According to a report in the Daily Mirror, the bomb attack occurred around 9 am at the Zion Church on Central Road in the heart of the town, just when the mass was to begin.

Residents said a suspicious man had first gone to the St Mary's Catholic Cathedral on the same road opposite St. Michael's Boys' School half hour earlier and a Catholic priest said he saw the suspect lurking around the complex the previous day as well.

The priest in charge had called the Easter Service at St Mary's early and it began at 7 am, instead of the usual 7.30 am. So, by 8.30 am when the suicide bomber arrived, most of the people who had congregated had left.

When the bomber learnt that the mass had ended, he made his way to the smaller Zion Church, raising speculation that his initial target had been the St Mary's Cathedral, residents were quoted as saying.

Relating his encounter with the suspect, Pastor Ganeshamoorthy Thirukumaran or Pastor Kumaran of Zion Church said: "I noticed a person standing near the pastor's office, with a bag on his shoulder and clutching another bag to his chest.

"I asked him who he was, and why he was standing there. He replied that he had just come to observe what was happening at the church and asked me details about the church."

Upon further questioning, the man, who looked in his 30s and was of medium height, identified himself as 'Umar' from the nearby Oddamaavadi Town, Pastor Kumaran reportedly said.

"I then invited him into the church as I thought he was like the many new people who come to our church. I didn't have any doubts or suspicions about him."

Pastor Kumaran told a senior worshipper, Brother Stanley, to speak to the visitor. The suspect's questioning and demeanour resulted in Brother Stanley trying to lead him out of the church premises.

The man then tried to force his way into the church. When his path was blocked, he reportedly detonated the bomb just outside the church and close to a group of children.

Pastor Kumaran's son was among the children who died in the explosion.

Residents said that if the man had entered the church building which had two floors and then had about 500 worshipers inside, the number of deaths would have been higher.

According to Batticaloa Division Police Superintendent Nuwan Mendis, the head of the suspected bomber was found on the roof of a house near the church.

The report quoted him as saying that investigators were trying to identify the killer through CCTV footage "and other methods".

The Zion Church was one of three churches and three luxury hotels which were targeted near simultaneously by suicide bombers on Easter Sunday, killing 359 people and wounding hundreds.