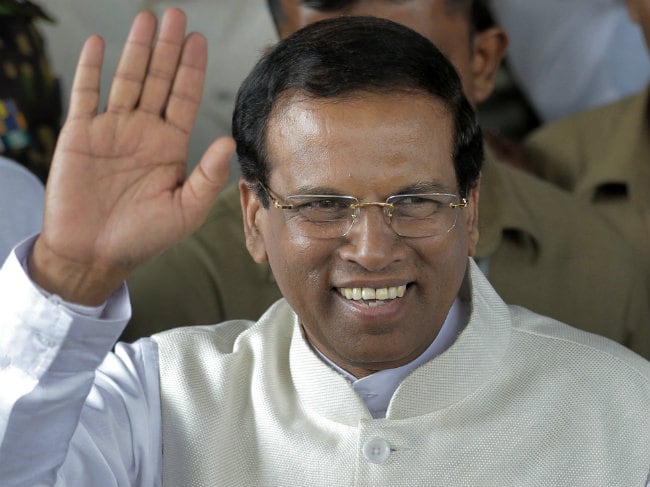 Maithripala Sirisena got 51.2 per cent of the votes against Mahinda Rajapaksa's 47.6 per cent. (Associated Press)

Colombo, Sri Lanka: In a stunning verdict, Sri Lankan voters on Friday ousted President Mahinda Rajapaksa from power, ending a 10-year rule that was marked by allegations of family rule, corruption and authoritarianism and chose his one-time minister Maithripala Sirisena in his place.

Hours after the results were declared, 63-year-old Sirisena, who led a revolt and defected to the opposition camp on the eve of announcement of the elections, was sworn-in as President symbolising a smooth transition of power.

Sworn-in along with him was his new Prime Minister Ranil Wickremesinghe, who till now was the leader of the opposition.

Both of them took the oath of office at a ceremony in the Independence Square. Supreme Court Justice K Sripavan administered the oath to Maithripala Sirisena.

What was considered impossible till a few weeks ago became possible when the voters showed the door to 69-year-old Rajapaksa, who was suave but ruthless when it came to decimating the dreaded LTTE that had earned him the title of 'King' among the majority Sinhalese and unpopularity with the minority Tamils.

Health Minister under Mr Rajapaksa and General Secretary of the ruling Sri Lanka Freedom Party till he defected, Maithripala Sirisena got 6,217,162 or 51.2 per cent of the votes against Mr Rajapaksa's 5,768,090 or 47.6 per cent.

"I declare that Maithripala Sirisena has been duly elected as the President of Sri Lanka," announced Commissioner of Elections Mahinda Deshapriya bringing the curtains down on the closely fought elections that was advanced by two years by Mr Rajapaksa who had amended the constitution for seeking an unprecedented third term.

Much before the declaration, Mr Rajapaksa, who was accused of practising politics of dynasty, conceded defeat early in the morning and left the presidential house 'Temple Trees'.

After his victory, Mr Sirisena thanked Mr Rajapaksa for ensuring a fair poll.

The minority Tamils and Muslims appeared to have voted heavily against Mr Rajapaksa, who had earned the wrath of Tamils over the alleged human rights violations during the final phase of war against the LTTE in 2009 and for not implementing the promised constitutional amendments to devolve power to them.

Mr Rajapaksa had promised smooth transition of power when Mr Wickremesinghe met him in the morning. The leader of the opposition said they have to respect Mr Rajapaksa for his action in finishing the war on LTTE.

Mr Sirisena was backed by the main opposition United National Party (UNP), the Buddhist nationalist Heritage Party and a host of other Tamil and Muslim minority parties. In all, 26 ruling coalition MPs deserted Mahinda Rajapaksa during the run up to the poll.

Mr Rajapaksa had created a cult image around himself and placed numerous relatives in top positions, sidelining the party's old guard, which helped give rise to the dissent.

Mr Sirisena, a staunch Buddhist like his rival, has a rural background, does not speak English and is always seen in the Lankan national dress in public.

Notwithstanding the support he may have got, Mr Srisena may not make a radical departure from the policies of the ousted President.

The opposition campaign had accused Mr Rajapaksa of nepotism, misrule, corruption and authoritarianism. Rajapaksa's brothers - Gotabhaya and Basil - were defence and economic ministers respectively besides a number of his family members who were holding key posts and positions.

In the run up to the election, Mr Sirisena had pledged to abolish the executive presidency within 100 days of being elected, repeal the controversial 18th amendment under which a President can seek re-election any number of times.

During campaigning in Tamil areas, Mr Sirisena made it clear that he would not go soft on Tamil hardliners or withdraw the army from the north in exchange for their support in presidential election.

"I have no intention of withdrawing the army from the north. As president, national security will be my responsibility," Sirisena had said, adding he would not allow the country to be divided or allow the LTTE to regroup.

"We have not signed any agreement with the Tamil National Alliance or Sri Lanka Muslim Congress to devolve powers or divide the country," he added.

About 75 per cent of the 15.04 million electorate voted in Thursday's election. Mr Sirisena took strong lead from the ethnic Tamil-dominated and Muslims-dominated areas.

The Tamils, who account for 13 per cent, angered by Mr Rajapaksa's successful military campaign that crushed the LTTE voted for the opposition unity candidate Maithripala Sirisena.

Mr Sirisena has no background of hobnobbing with the Colombo elite and socialites. No old boy of a leading Colombo school, but he was more than a match for Rajapaksa's rural appeal.

There were 19 candidates in the fray. But the main fight was between two-term president Mahinda Rajapaksa and Sirisena.

Promoted
Listen to the latest songs, only on JioSaavn.com
Mr Rajapaksa, who has been accused of turning the country into an authoritarian regime, will be regretting for calling the snap poll two years ahead of schedule.