Muslims make up around 10 percent of Buddhist-majority Sri Lanka's 21 million population and Christians about 7.6 percent. 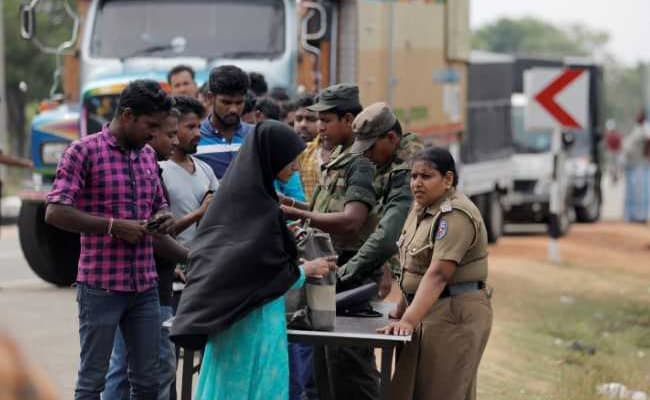 Sri Lanka has been under a state of emergency since the Easter bombings. (FILE PHOTO)

Sri Lanka's Roman Catholic Church appealed for calm and an alcohol ban Monday after clashes between Christians and Muslims in a town scarred by the Easter suicide attacks.

Hundreds of security forces entered Negombo to impose a curfew after dozens of Muslim-owned shops, homes and vehicles were attacked.

St. Sebastian's church in the town 40 kilometres (25 miles) north of capital Colombo was one of three churches and three hotels hit by jihadist suicide bombers on April 21 killing 257 people.

"I appeal to all Catholic and Christian brothers and sisters not to hurt even a single Muslim person because they are our brothers, because they are part of our religious culture," said Cardinal Malcolm Ranjith, archbishop of Colombo.

"Therefore please avoid hurting them and try to create a better spirit of understanding and good relations between all the communities of Sri Lanka," he said in a video message to the country.

The cardinal visited Negombo, held talks with clerics at a mosque and appealed to the government to shut bars in the Catholic-dominated town known as "Little Rome", said his spokesman Father Edmund Tilakaratne.

"As a temporary measure, the cardinal asked the government to order the ban on liquor sales in Negombo area," Tilakaratne told AFP.

In another televised appeal, Ranjith appealed to Christians, Buddhists and Muslims to show restraint.

Negombo suffered the highest death toll in the Easter Sunday attacks that were claimed by the ISIS. The bomb at St. Sebastian's killed more than 100 worshippers.

A top police officer said two arrests were made after the latest clashes and more suspects had been identified through CCTV footage.

The officer said all will be prosecuted under emergency laws approved after the Easter attacks.

"At least three people were injured in the clashes," the officer told AFP. "Although we have arrested only two suspects at the moment, many more have been identified and we will go after them."

The officer said an alcohol-fuelled dispute between two groups degenerated into the clashes.

Prime Minister Ranil Wickremesinghe said in a statement the government will compensate those who lost property in the night-time clashes.

AFP was unable to immediately verify the footage.

A few hundred extra troops and police were deployed late Sunday as authorities imposed a night-time curfew in the town.

The government blocked access to WhatsApp, Facebook and other social media platforms for several hours to prevent what it called the spread of rumours and videos aimed at instigating unrest.

The curfew was lifted on Monday morning and social media was working again by noon Monday.

Sri Lanka's main international airport is located in the area, but police said there was no disruption.

Muslims make up around 10 percent of Buddhist-majority Sri Lanka's 21 million population and Christians about 7.6 percent.

"The attendance was poor today, but we maintain a high level of security," the top police officer said. "Most parents are adopting a wait-and-see approach and we hope attendance will be back to normal very soon."

The country has been under a state of emergency since the Easter bombings.

Security forces and police have been give sweeping powers to arrest and detain suspects.

The government has blamed the Easter bombings on a local jihadist organisation which had pledged allegiance to ISIS.