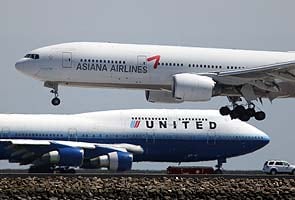 Seoul: South Korea's second-largest carrier Asiana Airlines said Wednesday it was cancelling charter flights to Fukushima in Japan from October due to radiation fears from the crippled nuclear plant there.

Asiana currently operates two return flights a month to Fukushima under a lease deal that expires at the end of September.

"The service will be halted in October and a decision will then be taken on whether to extend the cancellation depending on conditions," an Asian spokeswoman told AFP.

"Passengers are clearly anxious and we are paying close attention to all reports on nuclear reactor pollution levels at Fukushima," the spokeswoman said.

Promoted
Listen to the latest songs, only on JioSaavn.com
Tokyo Electric Power Company, which operates the Fukushima facility, said Tuesday that 300 tonnes of radioactive water were believed to have leaked from a tank at the nuclear plant.

Since a quake-generated tsunami struck Fukushima in March 2011, knocking out reactor cooling systems and sparking meltdowns, there have been four similar leaks from tanks of the same design.