Nene apologised after giving testimony to the inquiry, which is probing allegations of systematic corruption under Zuma's government involving the three Gupta brothers. 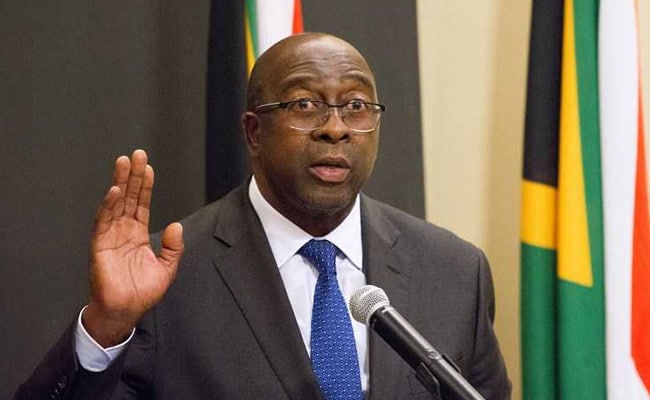 "Was wrong in meeting the Guptas at their residence and not my office," the South African minister said

South African Finance Minister Nhlanhla Nene resigned Tuesday over undisclosed meetings with a business family at the heart of a corruption scandal, dealing a blow to President Cyril Ramaphosa.

Nene was seen as one of Ramaphosa's closest allies and a leading figure in the government's efforts to tackle graft that allegedly flourished under former president Jacob Zuma, who was ousted in February.

But Nene revealed to a judicial inquiry last week that he had met with the Gupta business family at their home and offices six times -- contradicting earlier statements that he had only met them in passing at social occasions.

"I have decided to accept his resignation," Ramaphosa told a televised press briefing in Cape Town.

He added that Nene feared his testimony to the inquiry "detracted from the important task of serving the people of South Africa particularly as we work to re-establish public trust in government."

Ramaphosa stressed that Nene "has not been implicated in any act of wrongdoing himself" and hailed him as a minister who had "defended the cause of proper financial management as well as clean governance."

Nene, who was widely respected by investors, served as finance minister from 2014 to 2015 until he was sacked by Zuma and was re-appointed by Ramaphosa earlier this year.

Nene apologised after giving testimony to the inquiry, which is probing allegations of systematic corruption under Zuma's government involving the three Gupta brothers.

"I was wrong in meeting the Guptas at their residence and not in my office or at least a public place," his public apology letter read.

"These visits do cast a shadow on my conduct as a public office bearer. I deeply regret these lapses and beg your forgiveness."

The Guptas are a trio of Indian-born brothers accused of fraudulently profiting from vast government contracts and energy and transport deals under Zuma, who ruled from 2009 to 2018.

Ramaphosa has vowed to crack down on corruption as he tries to revive the economy and boost declining support for the ruling ANC party ahead of elections next year.

"Ramaphosa is cleaning things up and laying a platform so that he is able to campaign confidently when it is election time," Kwandiwe Kondlo, politics professor at the University of Johannesburg, told AFP.

"He was lucky because Nene is the kind of person who would admit when he has made a mistake without being pushed."

Kondlo said Mboweni was likely to take a hard line against public sector wage increases, and could provoke friction with the country's influential trade unions.

At the graft inquiry, Nene accused Zuma of pushing policies designed to benefit the Guptas, including a massive nuclear power expansion programme.

Nene, speaking under oath at the hearings, also said that his then deputy Mcebisi Jonas was offered his job after Nene refused to back the nuclear proposals.

The inquiry, which opened in August, is investigating allegations that Zuma organised the plunder of government departments and public enterprises in a scandal known as "state capture".

"No person should be above scrutiny," Ramaphosa said Tuesday, calling on officials to cooperate with the inquiry.

"(He) will have the advantage of being able to hit the ground running and is, at least, known to market participants, ratings agencies and international financial institutions," it said.

South Africa, Africa's most advanced economy, slipped into recession in the second quarter of this year, and suffers a stubbornly high unemployment of about 28 percent.

All eyes will now be on a much anticipated announcement by Moody's on SA's sovereign credit rating on Friday, and Mboweni's maiden medium-term budget policy statement in two weeks.