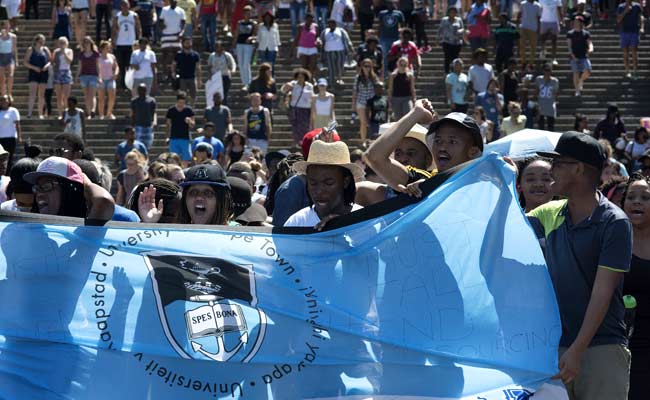 Students protest against fee hikes at the university of Cape Town, on October 20, 2015, in Cape Town. (AFP)

Hundreds of students forced their way through gates of the parliament complex and gathered at the entrance of the national assembly building, clashing with police who tried to force them back.

Universities in Cape Town, Johannesburg, Pretoria and other cities have halted lectures during several days of protests against fee increases that many say will force poor black students further out of the education system.

They sang popular protest songs and anti-apartheid slogans, and demanded to speak to Minister of Education Blade Nzimande by chanting "we want Blade, we want Blade".

Protests have been held regularly this year at several South African universities, targeting the limited racial transformation of education since the end of racist white-minority rule, which was eventually overthrown with Nelson Mandela's election in 1994.

Students at Stellenbosch University outside Cape Town have been lobbying for more classes to be taught in English rather than Afrikaans, the language of the former apartheid government.