Cyril Ramaphosa was on the election campaign trail with media in tow when he had to wait one hour for a train to arrive at the station in Mabopane township to the capital Pretoria. 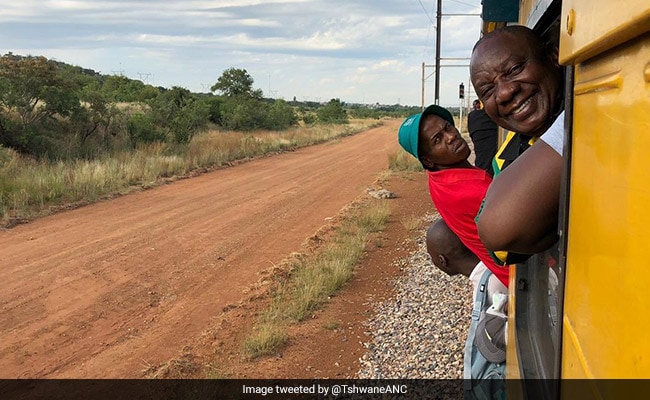 At the end of Cyril Ramaphosa's trip, he vowed to solve this "national problem".

South African President Cyril Ramaphosa found himself stuck on a commuter train for several hours on Monday, giving him a glimpse into the daily reality for commuters just two months ahead of the May polls.

Ramaphosa was on the election campaign trail with media in tow when he had to wait one hour for a train to arrive at the station in Mabopane township to the capital Pretoria.

The train took nearly three hours to complete what is normally a 45-minute ride from Mabopane to Pretoria, after it suddenly stopped while he was on it.

Journalists who followed Ramaphosa circulated images on social media, of a smiling president chatting with passengers.

Train delays are a daily occurence and derailments are common in South Africa.

Comments from regular commuters on Twitter included, from "Coversationalist", "from a 45 minutes ride to almost 3 hours; welcome to our world!" while "ActivistAfrica" said Ramaphosa and his ruling ANC "have no shame. People have been crying about Prasa & trains for over a decade".

Prasa is the national rail agency.

At the end of his over-long trip, the president vowed to meet quickly with rail agency officials to solve this "national problem".

"It is unacceptable that a trip of 50km (30 miles) can take us three hours and it must come to an end. We are going to talk to Prasa to get things right or otherwise heads must roll," Ramaphosa said.

Despite dipping in the polls, the ANC is tipped to win the upcoming parliamentary election with at least 60 percent of the vote.