Duduzane Zuma is accused of corrupt dealings with the government, which includes granting of mining contracts and influencing ministerial appointments 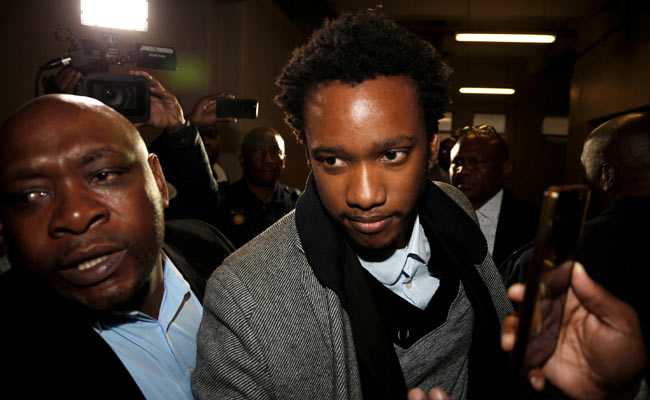 The son of scandal-hit former South African president Jacob Zuma appeared in ankle shackles in a Johannesburg court Monday to face corruption charges linked to his father's government before being released on bail.

Duduzane Zuma, 34, worked for the Gupta family, which is accused of corrupt dealings with the government, including being granted lucrative mining contracts and influencing ministerial appointments.

Underlining the Zuma family's dramatic change of fortunes, he was charged over involvement in a bribe allegedly offered to former deputy finance minister Mcebisi Jonas by the Guptas in 2015.

"The state did not oppose bail because he has been cooperating."

Jonas has said in a sworn statement that the Guptas offered Jonas the post of finance minister in return for obeying the family's instructions -- for which he would allegedly be paid 600 million rand ($50 million, 42.5 million euros).

"The charges are based on allegations made by Mcebisi Jonas," Duduzane's lawyer, Rudi Krause, said, adding that his client denied all wrongdoing.

Duduzane Zuma was granted 100,000-rand bail and the case was postponed until January 24.

He was ordered to surrender his two passports and report to a police station twice a week.

In an affidavit seen by AFP, Zuma stated that he had returned from his home in Dubai to face the charges in South Africa with a "light and confident heart" and that he was keen to give evidence at a pending enquiry into the Gupta graft scandal.

Duduzane is due back in another court on Thursday on culpable homicide charges over a deadly car crash in 2014 when his Porsche hit a minibus in Johannesburg, killing a woman.

Jacob Zuma, 76, was forced to resign in February as criticism grew from within the ruling ANC party over multiple corruption scandals.

The former president has been charged with 16 counts of graft linked to an arms deal from before he became president and is expected to face trial from November.

Zuma's successor as president, Cyril Ramaphosa, has vowed to crack down on government corruption, which he has admitted was a serious problem.