The crisis is a result of a festering dispute over whether the Solomon Islands should have switched diplomatic recognition from Taiwan to China. 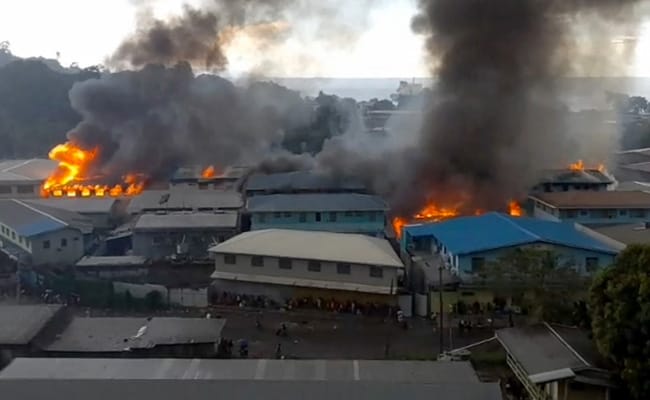 Angry riots that left buildings burning in the Solomon Islands capital on Thursday are the latest flare-up in two decades of tensions in the Pacific nation that have often ensnared Chinese businesses.

The recipe for the crisis is a complex mix of youth unemployment, anger over anti-coronavirus controls, historical inter-island rivalries and a festering dispute over whether the Solomon Islands should have switched diplomatic recognition from Taiwan to China.

The Solomon Islands have struggled with inter-island tensions and political violence since gaining independence from Britain in 1978.

The origins of the latest crisis date back to a period of civil unrest between 1998 and 2003 known as "The Tensions".

Residents of the principal island of Guadalcanal had come to resent the influence of settlers from other islands, in particular Malaita, the most populous province.

Guadalcanal militants launched attacks on settlers in 1998, giving way to five years of tit-for-tat sectarian unrest that brought the country to its knees.

Peace was ultimately restored in 2003 by the Regional Assistance Mission to Solomon Islands (RAMSI) made up of troops and police from Australia, New Zealand and 15 contributing Pacific nations.

RAMSI maintained a presence until 2017 but even after their departure tensions were never far below the surface.

Riots erupted in April 2006 after Snyder Rini was elected prime minister by legislators. Dozens of businesses owned by ethnic Chinese were looted and burned in the capital Honiara.

Local resentment had been building against the dominance of foreign business figures -- mostly ethnic Chinese from Taiwan, China, Malaysia and the Philippines -- as well as anger over corruption, inequality and resource exploitation.

Chinese businesses were targeted partly because of allegations they and Taiwan -- which at the time had diplomatic relations with Honiara -- helped finance Rini to bribe legislators for support in the vote for prime minister.

China had to charter planes to evacuate its citizens. Australia and New Zealand sent in peacekeeping troops to quell the unrest.

In 2019 the historical rivalry between Guadalcanal and Malaita converged with international geopolitics when veteran politician Manasseh Sogavare was elected prime minister, sparking another round of violent protests.

One of Sogavare's campaign platforms was to switch diplomatic recognition from Taiwan to China, which he did five months later.

Taiwan and China have been engaged for years in a diplomatic tug-of-war in developing countries, with economic support and other aid often used as bargaining chips for diplomatic recognition.

Sogavare's switch paved the way for unlocking huge amounts of Chinese investment but it was far from unanimously popular, particularly on Malaita where residents had benefited from Taiwanese aid projects and maintained deep links to Taipei.

A plan to lease an entire island to a Chinese state-owned company -- announced just days after the diplomatic switch -- soon had to be abandoned because it was deeply unpopular.

The political violence that exploded this week is a continuation of all of the above.

Writing in the Solomon Times, Transform Aqorau described it as "a culmination of a number of flashpoints that have been ignored", citing the China-Taiwan split, as well as tensions between the national and provincial governments.

Local reports say many of the protesters in Honiara this week had travelled from Malaita where anger had been growing over a perceived lack of central government investment and the decision to abandon Taiwan as an ally.

"It was a planned peaceful protest... What's happened is that tensions have boiled over," Mihai Sora, an expert on the Pacific at Australia's Lowy Institute, told AFP.

Malaita premier Daniel Suidani had been a vocal critic of the switch in diplomatic recognition to Beijing.

Suidani has maintained ties with Taiwan, in defiance of central government instructions, Sora said. Earlier this year, he was treated in a hospital in Taiwan.

Nicholas Coppel, a former Australian ambassador and RAMSI special coordinator, told AFP that most grievances in the Solomons "stem from feelings of inequality in the distribution of resources".

"The majority of people in Solomon Islands lead semi-subsistence lives in rural areas and care little about foreign policy decisions."

"However, they do care about the projects on Malaita that Taiwan once funded coming to an end and the preference that China is giving to sports facilities concentrated in Honiara," he added.