Blimps "Make Me Feel Unwelcome," Says Trump As He Arrives In UK

Donald Trump told the Sun newspaper that planned protests against him feel unwelcome so he was avoiding the capital as much as possible. 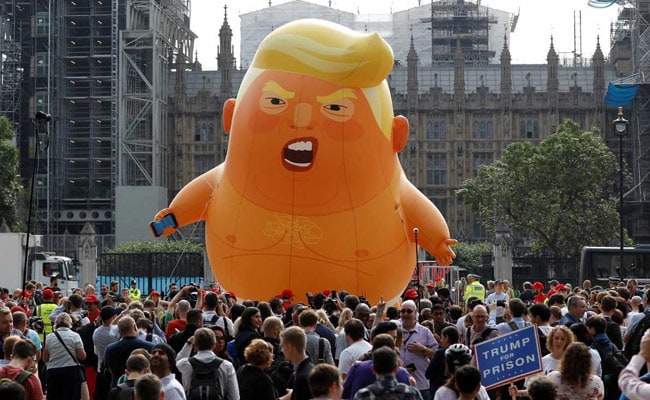 After a count down, a cheer went up as the large balloon rose to fly around next to parliament. (Reuters)

Opponents of Donald Trump flew a six-meter blimp depicting the U.S. president as an orange, snarling nappy-wearing baby just outside the British parliament on Friday.

Trump, who arrived in Britain on Thursday, told the Sun newspaper that planned protests against him in London and other British cities made him feel unwelcome so he was avoiding the capital as much as possible.

"I guess when they put out blimps to make me feel unwelcome, no reason for me to go to London," Trump told the newspaper.

"I used to love London as a city. I haven't been there in a long time. But when they make you feel unwelcome, why would I stay there?"

Britain regards its close ties with the United States, which it calls the special relationship, as a pillar of its foreign policy and Prime Minister Theresa May has courted Trump ahead of the country's departure from the European Union. 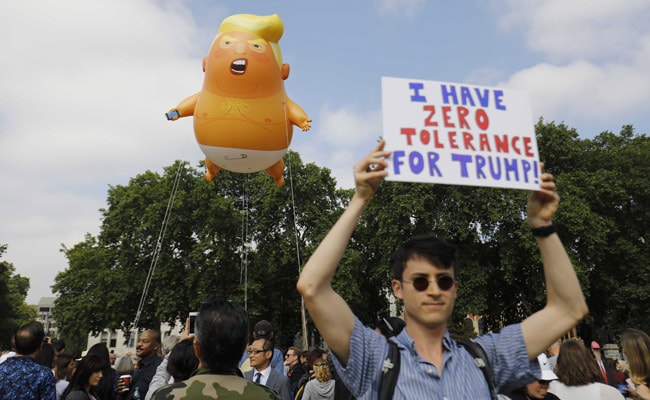 But some Britons see Trump as crude, volatile, unreliable and opposed to their values on a range of issues. More than 64,000 people have signed up to demonstrate in London against Trump's visit while other protests are expected around the country.

A few hundred people gathered to watch the blimp launch in Parliament Square, with organisers of the stunt wearing red boiler suits and red baseball caps emblazoned with "TRUMPBABYSITTER".

After counting down from 10 to 1 a cheer went up as the large balloon rose to fly around 10 metres off the ground, next to parliament and the River Thames.

Organiser Daniel Jones, a charity communications officer aged 26, said they were trying to make people laugh as well as making a serious point.

"It's also about giving a boost to those in America resisting his policies," he said. One man dressed as a gorilla and wore a Trump plastic mask, stood inside a large metal cage.

London Mayor Sadiq Khan, who was criticised by Trump in the Sun interview for failing to control crime and prevent militant attacks, gave his blessing for the blimp to be flown and rejected suggestions this showed a lack of respect to the U.S. president.

"The idea that we restrict freedom of speech, the right to assemble, the right to protest because somebody might be offended is a slippery slope," he told BBC radio, adding that a protest to welcome Trump was also planned.

"We have a rich history in this country of having a sense of humour as well."

(Except for the headline, this story has not been edited by NDTV staff and is published from a syndicated feed.)
Comments
Donald Trump in UKProtests against trumpProtests in UK against Trump