Singapore Gets First Female President Without A Vote

It was not the first time in the affluent city-state, which is tightly controlled and has been ruled by the same party for decades. 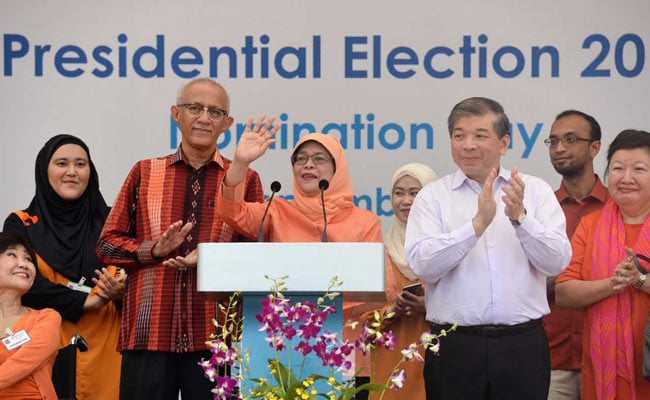 Singapore: An establishment stalwart was named Singapore's first female president Wednesday but the milestone was overshadowed by criticism her selection was undemocratic after she was handed the job without a vote.

Halimah Yacob, a former speaker of parliament from the Muslim Malay minority, did not have to face an election for the largely ceremonial post originally due this month after authorities decided her rivals did not meet strict eligibility criteria.

It was not the first time in the affluent city-state -- which is tightly controlled and has been ruled by the same party for decades -- that the government has disqualified candidates for the presidency, making an election unnecessary.

But there was already unease about the process as it was the first time that the presidency had been reserved for a particular ethnic group, in this case the Malay community, and the decision to hand her the job without a vote added to anger.

Social media was abuzz with criticism as Halimah, a bespectacled 63-year-old who wears a headscarf, was formally announced as the president-elect, with Facebook user Pat Eng writing: "Elected without an election. What a joke."

"I will call her President Select from now on," said Joel Kong on the networking site, while some posts were marked with the hashtag NotMyPresident -- echoing the message used by upset Americans after the election of President Donald Trump.

Halimah, a member of parliament for the ruling People's Action Party for nearly two decades before resigning to contest the presidency, tackled the doubts about the selection process in a speech to a cheering crowd after she was named president-elect.

"I'm a president for everyone. Although there's no election, my commitment to serve you remains the same," she said.

Authorities had decided to allow only candidates from the Malay community to put themselves forward for the presidency, a bid to foster harmony in the city-state of 5.5 million people which is dominated by ethnic Chinese.

Promoted
Listen to the latest songs, only on JioSaavn.com
Singapore's head of state has limited powers, including vetoing senior official appointments, but an establishment figure has always held the role and there are rarely tensions with the government.