Loewenstern didn't believe her mother was dead. She wanted to find out what happened to her. Joanne Loewenstern didn't want to believe her mother was dead. But it was what she had always been told.

She was 16 when she found out she was adopted. Her real mother died after giving birth to her in a Bronx hospital in 1938, she was told, but "I had a feeling she was alive somehow," Loewenstern told The Washington Post. "I just felt that I didn't believe it for some reason."

The only thing she knew about her mother was her name: Lillian Feinsilver. She knew where she was born - Bellevue Hospital in the Bronx, in 1938 - and that she was adopted two months later by two loving foster parents. And for most of her life that was as far as she thought the story would go.

It had always been a good life, she said. She married in 1959 and moved from the Bronx to Far Rockaway, where she and her husband bought a home of their own. She raised four boys while her husband worked at auto dealerships and in manufacturing, taking extra jobs working Bingo night Mondays and Wednesdays and at a funeral home on Saturdays, where his job was to watch and pray over dead bodies through the night.

But still, all those years Loewenstern didn't believe her mother was dead. She wanted to find out what happened to her, she told her husband, but like her parents, he wondered why she needed to. Look what you have now, he would say. 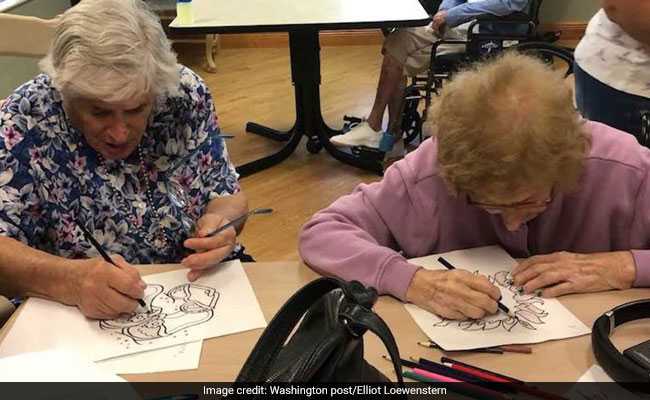 Joanne Loewenstern and her mother color together for the first time.

Eventually, after a failed attempt with a private detective, Loewenstern gave up.

"I said 'you know what, I'm done,'" Loewenstern said Thursday from her home in Boca Raton, Florida, where she moved in 1992. "Sure I cried, because you know, I felt like I didn't belong in anyone's circle, and that was it."

But that was all before the time of DNA websites such as Ancestry.com, which in recent years have revolutionized genealogy, making even the most complex family trees and searches for distant family members accessible to anyone with $99.

Shelley Loewenstern, married to Loewenstern's son Elliot, was the first to suggest that she should submit her DNA to the website. What was there to lose, Loewenstern thought. She was 79 by then, and she had been spending her evenings watching the TLC show "Long Lost Family," about adopted children or other disconnected family members reuniting with loved ones, often after spending their whole lives wondering and searching, just as Loewenstern had. Maybe she could get just as lucky as the people on TLC, she thought.

"I wanted to find out who she was before I went," she said.

On May 13, Shelley got an email, sent to her through Ancestry.com. It was from a man named Sam Ciminieri. He had found a match, he said.

"Do you know Lillian Feinsilver?" Shelley asked him. Yes, he said. She was his mother, and she was alive.

Remarkably, she was living just 80 minutes away from Loewenstern in an assisted living facility in Port St. Lucie, Florida.

"As it turns out," Elliot Loewenstern told The Washington Post, "we have a whole 'nother family we never would have discovered."

Lillian Ciminieri was by then 100 years old. She used a wheelchair and had dementia, but Sam Ciminieri's ex-wife, who continued caring for her, told the Loewenstern family that over the years there was one thing Lillian never stopped saying. "She kept saying she lost her daughter, she lost her daughter," Shelley said.

The story Shelley said she learned from Ciminieri's ex-wife was startling. Lillian had given birth as a single unwed mother, and it appeared the baby had been taken from her without her knowledge, the family said.

When Lillian was a younger woman, she used to regularly take the train from New Jersey to Pennsylvania to visit her niece and her granddaughter, prizing the visits with the young girls because, she would say, I lost my daughter.

And then it hit Shelley: "Both of them went through life thinking the other had died," she said.

The newfound family members decided to act quickly. Both of their mothers were getting old, and so within a matter of weeks they organized a gathering at the assisted living facility where Lillian Ciminieri lived.

On June 24, Loewenstern, Shelley and Elliot and one of their four sons took a seat in the nursing home's common area as Sam Cimineri wheeled his mother up to the table. Everyone mumbled awkward hellos, and although Loewenstern had waited 79 years for this day it all seemed a bit anticlimactic at first. Nobody could quite find the words.

"I don't know if she recognizes me," Loewenstern said.

Her mother didn't say anything, and so after another few silent moments Loewenstern turned to her and made the introduction: "Hi," she said. "I'm Joanne. Do you know who I am? Do you recognize my picture from any place?"

"Ask her if she gave birth at Bellevue," Loewenstern said. "To me."

Still nothing and so Loewenstern started to cry - but it was just then that Lillian started to perk up. Shelley, in a burst of excitement, had her kids on FaceTime, on multiple cellphones.

It's your great-grandson, she said, showing one of the phones to Lillian. These are your great grandchildren.

Lillian smiled and then she finally spoke into the phone: "How are you?" she asked. And after a while, Joanne Loewenstern told The Post, her 100-year-old mother started to understand.

She said, finally, "This is my daughter."

"This had gone on for so many years," Loewenstern said. "I felt like I came this far, and I looked at her and I was very, very happy."

She came back Wednesday, she said, and that time her mother seemed to really know it was her, and there was no need for more questions.