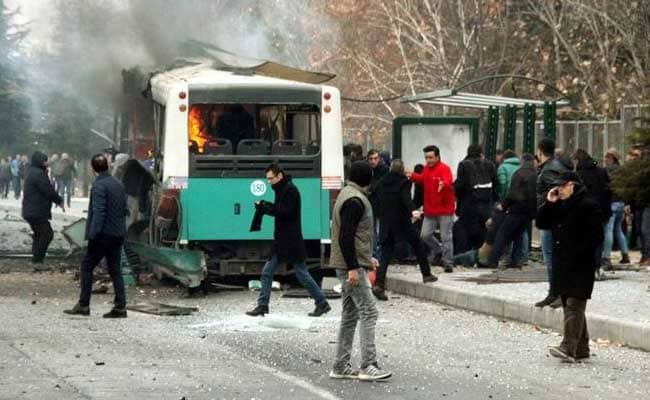 A bus was hit by an explosion in Kayseri, Turkey killing several soldiers of the Turkish army. (Reuters)

Istanbul, Turkey: Thirteen Turkish soldiers were killed and 48 wounded on Saturday in a car bomb blast that targeted a bus transporting them in the central city of Kayseri, the army said. The soldiers -- all low-ranking privates and non-commissioned officers -- had been given permission for leave from the commando headquarters in the city, it said in a statement. The wounded were being treated in hospital while there could also be additional civilian casualties, it added.

Television pictures showed that the bus had been reduced to a smouldering wreck by the impact of the blast. The bomb placed in a car went off as the bus was driving by, the Dogan news agency said.

The explosion comes a week after 44 people were killed on December 10 in a double bombing in Istanbul after a football match. The attack was claimed by Kurdish militants.

Deputy Prime Minister Veysi Kaynak said in televised comments that the attack in Kayseri was "unfortunately similar" to last weekend's strikes in Istanbul. 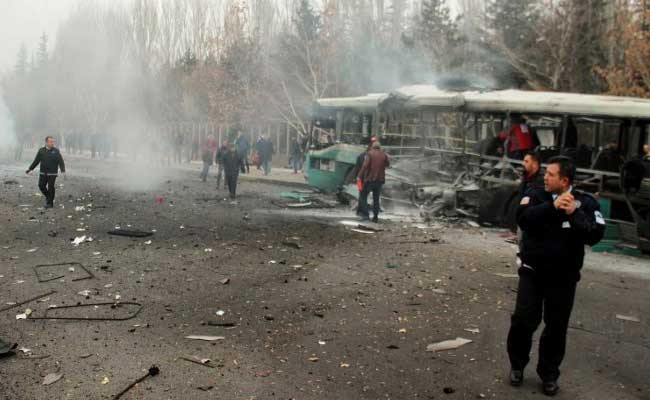 The bus was ferrying Turkish soldiers who had taken permission to go to a local market for the day. (AFP)

The Dogan news agency said that the blast took place opposite the Erciyes University in the city. NTV television said there could be fatalities as a result of the blast.

The state-run Anadolu news agency said that the bus was owned by the municipal transport authorities in Kayersi but was transporting Turkish soldiers who had taken permission to go to a local market for the day.

President Recep Tayyip Erdogan has been informed of the attack by the chief of staff General Hulusi Akar, Anadolu added.

Interior Minister Suleyman Soylu was on his way to the city.

Turkey has seen a spate of deadly bombings in 2016 blamed both on jihadists and Kurdish militants that have left dozens dead.

In June, 47 people were killed in a triple suicide bombing and gun attack at Istanbul's Ataturk airport, with authorities blaming the Islamic State group.

Another 57 people including 34 children were killed in August in a suicide attack by an ISIS-linked bomber at a Kurdish wedding in the southeastern city of Gaziantep.

Kurdish militants have twice struck with bombings that killed dozens in Ankara in February and March.

The country is also still reeling from a failed July 15 coup blamed on the US-based Islamic preacher Fethullah Gulen that has been followed by a relentless purge of his alleged supporters from all state institutions.

One of the main cities of central Turkey, Kayseri is a key industrial hub that is usually seen as a peaceful area.

It is well west of the southeast of the country that has been hit by months of deadly fighting between the outlawed Kurdistan Workers Party (PKK) and the security forces.

There was no immediate indication of who was behind the latest attack. Large numbers of ambulances and police vehicles were sent to the scene.

The government slapped a temporary broadcast ban on footage of the attack, as is becoming typical in the aftermath of major incidents in the country.

The Turkish military has stepped up operations against the PKK after a fragile ceasefire broke down in the summer of 2015. Since then, there has been a dramatic surge in violence that shows no sign of ending.

Last week's double bombing in Istanbul which targeted police after a match of the Besiktas football club was claimed by the Kurdistan Freedom Falcons (TAK) seen as a radical offshoot of the PKK.

Promoted
Listen to the latest songs, only on JioSaavn.com
The attack in Istanbul prompted a sharp response from Erdogan, who vowed Ankara would "fight the scourge of terrorism right to the end".

"They should know that they will not get away with it ... They will pay a heavier price."