Semi-nude shoppers get rewarded in Spain 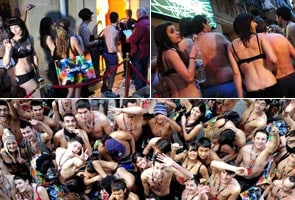 Madrid: Hundreds of shoppers in Spain braved chilly weather to queue outside shops in their underwear on the first day of the winter sales Friday to take advantage of an offer of free clothes.

"Come in your underwear and get a free outfit", so declared an offer by Spanish-based clothing retailer Desigual for the first 100 people to enter each of their stores in cities around the country -- Barcelona in the northeast, San Sebastian in the north and Marbella in the south.

In the capital Madrid, which launched its winter sales early, dozens of barely brave shoppers also did the same thing on Sunday.

The lucky ones were entitled to a top item of clothing, for example a blouse or T-shirt, and one bottom item, such as a pair of trousers or a skirt.

Spain is struggling to emerge from an economic crisis with unemployment at almost 20 percent, the highest in the European Union.