Scientists Zoom In On Fast Radio Bursts, The Most Mysterious Signals In Space

An international team of astronomers traced a repeating fast radio burst to a region of star formation in a dim dwarf galaxy 3 billion light-years away. 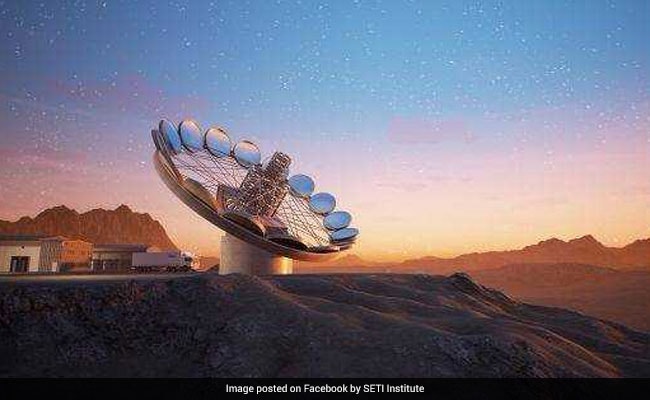 Scientists have been befuddled by fast radio bursts since the first one was discovered in 2007.

Nobody knows what causes fast radio bursts - brief, bizarre radio wave beams that emit more energy in a fraction of a millisecond than the sun does all day. But scientists just got closer than ever before to the source of one of these enigmatic signals.

In research presented Wednesday at the annual meeting of the American Astronomical Society, an international team of astronomers traced a repeating fast radio burst to a region of star formation in a dim dwarf galaxy 3 billion light-years away. There, they said, the high energy beam is being savagely twisted by a powerful magnetic field amid a dense cloud of hot, ionized gas.

The finding helps illuminate the extreme environment these radio bursts call home. But scientists are still scratching their heads over what could cause such a mighty blast.

"It's a mystery," said Cornell astronomer Shami Chatterjee, one of the co-authors of a study on the findings published Wednesday in Nature. Then he laughed.

"I say that as if I am disappointed, but let's be real - there is nothing like a good mystery to try to figure out. And this is such a tantalizing mystery and as time goes on we're getting more clues."

Scientists have been befuddled by fast radio bursts, or FRBs, since the first one was discovered in 2007. They are far more powerful than anything in our own galaxy, and so fast and focused they seem to have shot out the barrel of some cosmic gun. They are also dispersed - high frequency wavelengths arrive earlier than lower frequency ones, indicating that the burst travel long distances across vast expanses of space to reach Earth.

Research suggests that as many as 10,000 of these bursts occur every day, but so far astronomers have only spotted a few dozen. Of those, just one has gone off more than once: a signal called FRB 121102, captured in 2012 by the Arecibo Observatory in Puerto Rico.

In research published last January, astronomers described how they took advantage of the repeating nature of FRB 121102 to trace the burst back to its host galaxy. Many of those same astronomers have been gazing at that galaxy ever since, ready to catch FRB 121102 whenever it flares.

Their patience paid off on Dec. 25, 2016. In a space of about half an hour, the telescope at Arecibo witnessed more than a dozen bursts. "We called it our Christmas present," said Jason Hessels, an astrophysicist at the University of Amsterdam and a co-author of the new research.

Subsequent observations by fleet of powerful telescopes working in a wide range of wavelengths captured dozens more bursts (FRB 121102 has now been seen flaring more than 200 times) and revealed some surprising characteristics of this far-off flashbulb.

Chief among these quirks is the dramatic twisting of the signal's polarization - the plane on which the waves oscillate. The flares from FRB 121102 are 500 times more twisted than any other burst scientists have seen, suggesting they were warped by a potent magnetic field.

The only known source of such intense magnetism in our own galaxy is the supermassive black hole Sagittarius A*, which sits at the Milky Way's center. "Maybe this FRB source is in a similar environment, a galactic center environment," Hessels said.

An alternative explanation is that the FRB source is surrounded by a highly-magnetized cocoon of material - perhaps the fog of gas and dust from which new stars form, or the detritus created by a dying star when it explodes. It's theoretically possible that such a celestial dust devil could produce a large rotation measure - and co-author Betsey Adams of the Netherlands Institute for Radio Astronomy pointed out that optical observations of the FRB's origin indicate it comes from a nursery for newborn stars.

The higher-resolution radio observations made possible by knowing the precise location of the burst also revealed that bursts were clustered - several might happen in the space of a second - and oddly structured. A 3-D-printed image of one burst featured jagged spikes and unusual pauses in the signal, making it look like a bit like Malificent's castle in "Sleeping Beauty."

Andrew Seymour, another co-author of the new report and an astronomer at the Universities Space Research Association and Arecibo Observatory, said it isn't clear whether those jagged features in the signal are produced at the source, or are instead a reflection of the extreme environment around it.

Another oddity: Though FRB 121102 is "prodigiously energetic," as Chatterjee put it, it only emits radiation in the radio part of the electromagnetic spectrum.

"We were looking for it in X-rays, gamma rays, and there's nothing there," Chatterjee said.

Breakthrough Listen, a $100 million initiative to search for extraterrestrial intelligence, has also taken an interest in FRB 121102. In a fanciful paper published in the Astrophysical Journal Letters this year, a pair of Harvard theorists suggested that a solar powered alien craft could explain the bursts. Breakthrough's observations at the Green Bank Telescope revealed no extraterrestrial voyagers, but astronomers did find the same signatures of intense magnetism observed at Arecibo.

And still, the astronomers have no idea what is actually producing these flares. They speculate that it may be a neutron star - the dark, dense, smoldering core that's left behind after a mid-sized star explodes and goes nova. Neutron stars are compact enough to produce the short, focused signal that characterizes an FRB, and sufficiently matter-rich to generate something so powerful. But what could possibly prompt a neutron star to burp out so much energy, over and over again?

"The joke is that there are far more theories than there are observed bursts," Hessels said.

Meanwhile, astronomers are eager to detect additional repeating bursts. FRB 121102 is the only one they've witnessed more than once, and they're still not certain whether that's due to a fluke of timing or something more fundamental. It's possible there are two classes of FRBs - those that repeat and those that don't. Or maybe there's something unique about FRB 121102 that makes it easier to see; Chatterjee suggested that a cloud of ionized gas around the source might act like a magnifying glass lens, focusing the signal in the direction of our telescopes.

West Virginia University astrophysicist Sarah Burke-Spaloar, who has been involved in previous research on FRB 121102 but was not part of the most recent study, said this latest finding will help "steer the field."

"It's one of those fields that every step of the way every new thing we learn makes the phenomenon look more complex," Burke-Spolaor said.

If astronomers are able to find more repeaters and track down their sources, she continued, they will open up a rare new window on the universe - particularly the murky expanse beyond the Milky Way. As FRBs traverse the dark spaces between galaxies, they interact with the diffuse material in those regions and carry a record of that interaction down to Earth.

Promoted
Listen to the latest songs, only on JioSaavn.com
"I think the bottom line of that is they basically allow us to observe the invisible universe between galaxies," Burke-Spolaor said.