Scientists To Look For Aliens On Jupiter And Saturn's Icy Moons 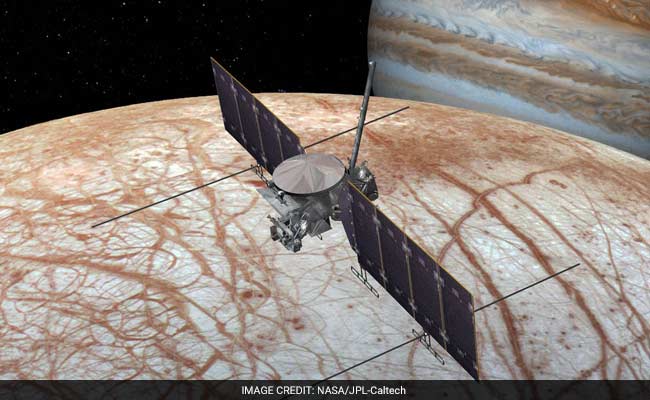 One of the two possible candidates is the icy moon of gas giant Jupiter, Europa.

Washington: In one of its most ambitious projects in deep space, a team of NASA researchers are proposing to send robots at the centre of icy moons to explore the subsurface ocean for presence of life.

The two possible candidates are: the icy moons of gas giants Jupiter and Saturn which harbour sub-surface oceans perfect for hosting life.

According to a recent study, Jupiter's moon Europa is creating a strong gravitational pull which is creating more heat on the moon's ice-sheet that is enough to support a sub-surface ocean.

But it is Saturn's icy moon Enceladus -- 500 km in diameter and 1.272 billion km away from the Earth - that serves as a leading candidate for extra-terrestrial life. 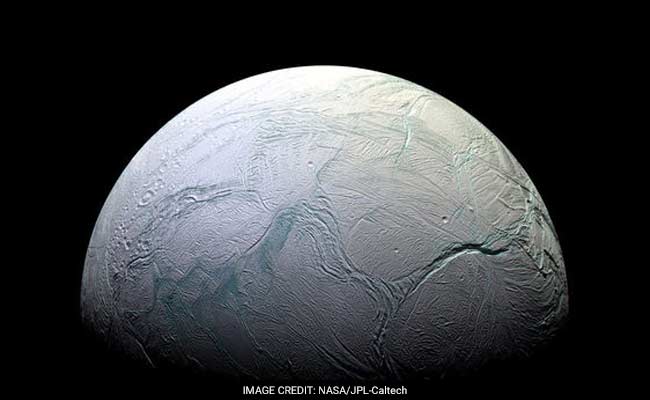 This view of Saturn's moon Enceladus was taken by NASA's Cassini spacecraft.

This year, one of most promising proposals that NASA Innovative Advanced Concepts Programme (NIAC) has received is from the researchers at the Jet Propulsion Laboratory (JPL) at Pasadena, California - proposing robots to explore the icy moons.

The Icy-Moon Cryovolcano Explorer (ICE) project aims to land on these moons and send a robotic explorer down the ice volcano to deploy a submersible to explore the ocean.

With a thick icy crust, Europa may be tough for a drilling robot to reach the subsurface ocean so the researchers have now turned their eyes on Enceladus.

The data from NASA's Cassini probe has strongly indicated that the cryovolcanic plumes of Enceladus probably originate in a biomolecule-friendly oceanic environment.

Enceladus, which probably has an ocean underlying its icy surface, has somehow managed to sprout multiple fissures along its south pole.

A surface-to-subsurface robotic system, the ICE will land on the surface of an icy moon, traverse to a cryovolcano, descend into its opening, perform in-situ science in the vent or crevasse and ultimately deploy underwater vehicles to explore a subsurface ocean. 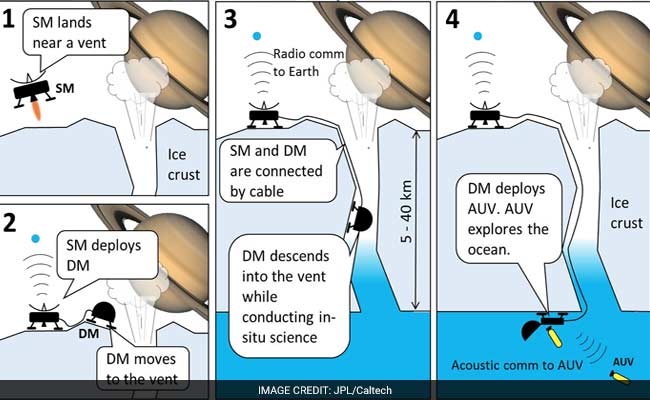 DM will carry AUVs and descend into a vent by using a combination of roving, climbing and hopping, like an experienced human alpinist.

SM will stay on the surface, generating power and communicating with the Earth.

DM will rely on the power and communication link provided by SM through a cable to minimise the size and weight.

Once DM reach the subsurface ocean, it will launch the AUVs to explore the exotic environment that potentially harbours life.

Although orbiters can perform in-situ science of plumes, relatively large dust grains are hard to reach orbital altitude. Yet it is those mineral grains that carry rich information about the habitability of the subsurface ocean.

Second, ICE enables the exploration of subsurface oceans by providing an access to it.

Third, it enables the operation of AUVs in subsurface ocean by providing three essential services: communication, localisation and power.

"A successful completion of the project will mature this exciting concept into a credible element of the growing outer planets and icy moons exploration portfolio," the US space agency said in a statement.

Huge Internet Outage, Some Of World's Biggest Sites Go Down