Scientists Detect Signal From 'Cosmic Dawn,' When Stars First Lit Up The Universe

No telescope today can detect the glow of these primitive stars. But theoretical models had suggested that their ultraviolet radiation would have pierced the hydrogen haze of the early universe, exciting the atoms within. 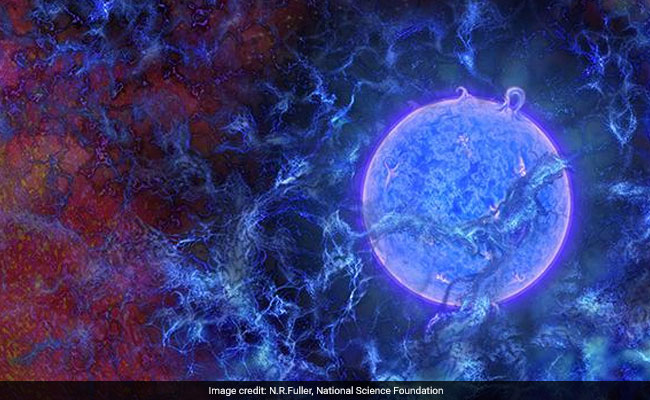 An artist's illustration of what the first stars in the universe may have looked like.

For the first time, scientists have detected a signal from "cosmic dawn" - the moment when the universe's earliest stars emerged.

The signal, reported Wednesday in the journal Nature, is little more than a blip in the radio echo of that ancient era, as difficult to detect as the wingbeat of a hummingbird caught in a hurricane. But if confirmed, researchers say it can help explain the events that gave rise to the first stars, black holes, galaxies and, eventually, every other object in existence.

In a companion study, another scientist proposes that the unexpected size of the signal suggests it was influenced by dark matter - a potential new clue to one of the most persistent mysteries in the universe.

"It's very, very exciting for the field," said Anastasia Fialkov, a Harvard University astrophysicist who was not involved in either study. "We have never seen the light of the first stars, and this is its signature."

For millions of years after it began, the universe was a chilly and lightless place. Its only contents were tenuous, invisible clouds of inert hydrogen gas. Its only energy was the radiation left over from the Big Bang - a persistent hum known as the cosmic microwave background.

Then, slowly, gravity began to gather up the densest regions of gas. Matter coalesced, collided, collapsed. Ultimately, this created the nurseries from which the first stars formed.

No telescope today can detect the glow of these primitive stars. But theoretical models had suggested that their ultraviolet radiation would have pierced the hydrogen haze of the early universe, exciting the atoms within. This in turn would cause the atoms to absorb a small sliver of the cosmic microwave background radiation, imprinting it with a faint but indelible signature.

In a 1999 study, astrophysicists proposed that researchers could detect this signature by searching the entire sky for the muted wavelengths, which would appear as a dip in the radio end of the electromagnetic spectrum. Such a project would require only a small antenna but incredibly careful analysis - the dip overlaps with the most popular frequencies on the FM radio dial, as well as many natural radio signals. Peter Kurczynski, a program director for the National Science Foundation, has compared the effort to turning on every radio station but one simultaneously, then listening to figure out which station was missing.

A decade later, the NSF opted to fund the construction of an antenna in the Australian desert to listen for this signal. The instrument was deceptively simple, just two metal plates perched atop a dining room-table-type structure and situated at the center of a 30-meter-wide mesh carpet. But it sensed everything: the cacophony of human communication, the din of radio waves coming from the Milky Way and, beneath it all, the subtle buzz of the cosmic microwave background.

"The cosmological signal is ... 0.1 to 0.01 percent of the total amount of radio power we're received," said Judd Bowman, an astrophysicist at Arizona State University and the lead author of the first Nature study. But by subtracting out the louder, closer signals, Bowman and his colleagues could pin down the signature of emerging stars emanating from the moment 180 million years after the Big Bang.

For comparison, the most distant astronomical object ever observed is a galaxy that existed 400 million years after the universe began.

To ensure their signal was real, rather than a quirk of their instrument or a fluke in their data, Bowman and his colleagues spent two years considering and discarding a range of alternative explanations. They repositioned the antenna, tested it in the lab with simulated radio sky, even built a copy of the instrument to demonstrate that the experiment was reproducible. So far, they haven't been able to prove themselves wrong.

The stars whose light led to the newly detected signal were very different from the ones that glitter in our night sky. Comprising just hydrogen and helium - the only elements that existed in the early universe - they burned blue, bright and fast. But when they died, they produced the explosions that gave rise to the heavier elements, including the carbon and oxygen atoms on which all life depends.

"These stars made the seeds for everything that came out of them," Bowman said. "It's like the fertilizer on the field, in a way. You can't grow the crops without putting the right ingredients in the mix. That's what these stars did."

He and his colleagues were surprised to discover that the signal was twice as large as models predicted, meaning the hydrogen fog must have absorbed more radiation than was thought possible. Bowman's team approached Rennan Barkana, an astrophysicist at Tel Aviv University in Israel, and asked for his take.

In the companion study, Barkana writes that dark matter may have interacted with the cosmic gas, cooling it and allowing deeper absorption.

Scientists only know of dark matter - an enigmatic force that's thought to make up about 27 percent of the universe - through its gravitational effects. It is invoked to explain why galaxies don't tear themselves apart.

Barkana's hypothesis would suggest that it can interact with atoms in other ways as well, Bowman said. "It's the first new lead on what dark matter actually is that we've had in a while."

He noted that other astrophysicists may come up with differing explanations for the signal's size once they've had time to analyze it. Meanwhile, two teams of researchers operating instruments similar to Bowman's will attempt to confirm the cosmic dawn signal.

In an analysis for Nature, Harvard University astronomer Lincoln Greenhill imagined the possibilities raised by more and better detections: Scientists could use it to map the three-dimensional structure of the cosmos in this era. They could draw inferences about the "dark ages" before the first light sources emerged. They could probe the role of dark matter in creating the density fluctuations that allowed objects to form amid the dispersed hydrogen fog.

Promoted
Listen to the latest songs, only on JioSaavn.com
"It's about understanding our cosmic origins," Bowman said. "If you think about, how did humans get here, basically the first rung on the ladder is you need something in the universe."

(This story has not been edited by NDTV staff and is auto-generated from a syndicated feed.)
Comments
Cosmic DawnUniverse