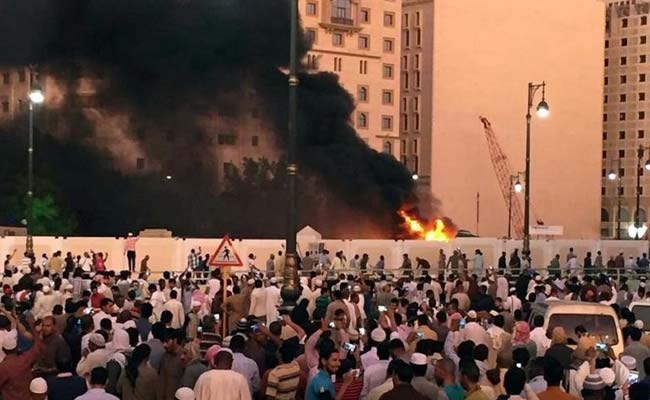 An attack by a young Saudi suicide bomber at the Prophet's mosque in Medina killed 4 policemen. (Reuters)

Riyadh: Technical hitches limited the death tolls in three suicide attacks in Saudi Arabia but the apparent coordination of the blasts suggests jihadis have the tools to sustain their bombing campaign.

Three young Saudis detonated explosive vests near a Shi'ite mosque in Qatif last Monday, killing only themselves, while an attack by another young Saudi suicide bomber at the Prophet's mosque in Medina killed four policemen.

Before dawn the same day a 34-year-old Pakistani driver had blown himself up in a car park outside the US consulate in Jeddah but only injured two security guards.

"Technically these people are poor. Psychologically they are very poor. Training-wise they are poor," said Mustafa Alani, an Iraqi security expert at the Jeddah-based Gulf Research Centre with ties to the Saudi Interior Ministry.

"Out of five suicide bombers, four killed themselves for nothing."

Nevertheless, that five individuals were able to build or acquire explosive vests and to plot three attacks on the same day points to a command chain and supply network that presents a formidable threat, security analysts say.

The attacks were not claimed by any group although the government believes Islamic State is responsible after detaining 19 suspects linked to the five attackers.

The coordination but poor training appear to be a sign of Islamic State's operational model in Saudi Arabia, recruiting would-be jihadists online and managing plots remotely with minimal involvement in training.

An ISIS recruit inside the kingdom will then seek friends or relatives to join him in an attack, while his handlers in Syria or Iraq suggest a target and help to provide explosives and instructions on how to make a bomb.

That low profile makes it very difficult for the security forces to identify networks or uncover attacks before they are carried out, and ISIS's minimal investment in operations means it has little to lose if a plot goes awry.

Unlike during an al Qaeda campaign a decade ago there is no network of interconnected cells under a central leadership in Saudi Arabia that can be infiltrated or rolled up by the security services.

"They ask young people to stay in Saudi Arabia and create sleeper cells and this is a very dangerous thing because you do not know who is in a sleeper cell or who is a lone wolf," a senior Saudi security officer told Reuters last year.

Traces of nitroglycerine were found at the locations of each of last week's explosions and preliminary investigations suggest the explosives were of a type used by the military.

"We're talking about highly organised attacks under a central command (outside Saudi Arabia) and with a chain of supply," said Alani.

However, he said the lack of an in-country leadership able to carefully select and groom recruits, provide training, centralise bomb making and prepare attackers psychologically meant that many of its operations were ineffective.

The attackers in Jeddah and Medina were both approached by police in car parks near their likely targets because their nervous behaviour attracted suspicion. The Jeddah bomber detonated his device too far from the police to kill them.

After the attack in Qatif, police found explosive packs intact, Alani said, indicating that only the detonators had exploded, killing the bombers but not causing wider damage. Turki said he was unable to confirm that some devices did not properly explode.

Saudi Arabia's success in clamping down on al Qaeda since its 2003-06 attacks has forced Islamic State towards its model of remote control for lone wolves or sleeper cells.

Western diplomats say the kingdom has developed one of the most formidable counter-terrorism operations in the Middle East under Crown Prince Mohammed bin Nayef, the Interior Minister.

The security police, known as the Mubahith, closely monitor Saudis with suspected connections to militants and have detained over 15,000 suspects since the al Qaeda campaign began.

The rate of arrests slowed near the end of last decade but accelerated again after 2011, when Arab Spring uprisings and civil wars across the Middle East impelled thousands of young Saudis to head overseas to join the fight with many returning home after, officials said.

"The Saudis have come up with a successful strategy with dealing with this sort of problem and they have mounted a highly effective public education campaign in the mosques," said former US ambassador Chas Freeman.

"And second, they have very effective internal security mechanisms that have enabled them to spot people in the process of turning to terrorism."

Security tactics have been accompanied by softer measures too. So-called "rehab" centres for militants employed Wahhabi clerics to preach that obedience to the king trumped individual decisions to go and fight in defence of Muslims overseas.

Meanwhile, Saudi media were given access to young men who had returned from fighting overseas whose stories of the brutal reality of life among jihadist groups were broadcast in an effort to dissuade others from militancy.

But sympathy towards fellow Sunni Muslims fighting the war in Syria has created a new generation of young Saudi jihadists.

They support the idea of an ISIS caliphate and view Saudi Arabia's rulers and the army and clergy which back them as infidels who betray true Islam.

The government crackdown has forced ISIS has found new ways to reach potential recruits from a distance, for example through online computer games that are hard for security services to monitor.

Mohammed, a 15-year-old in Riyadh, was contacted by jihadists while playing games on his desktop computer and messaging other online players, his father told Reuters earlier this year, asking to keep his anonymity.

He was chatting with someone who started to send him messages about the injustice faced by Sunni Muslims in Iraq and Syria. "Come play with us for real," the person said, and sent Mohammed some films showing ISIS attacks.

His parents blocked the contact. Reuters was not able to confirm who had contacted Mohammed.

"Daesh is trying to be very active in social media, but I think we are winning thanks to their stupid operations. How can you defend somebody who kills innocents in mosques?" said the senior security official.
© Thomson Reuters 2016
Comments
Saudi Arabia terrorismSaudi jihadists