Its Lifeblood Attacked, What Are Saudi Arabia's Options Now?

American officials are talking to the Houthis about ending the conflict, which has caused the world's greatest humanitarian crisis. 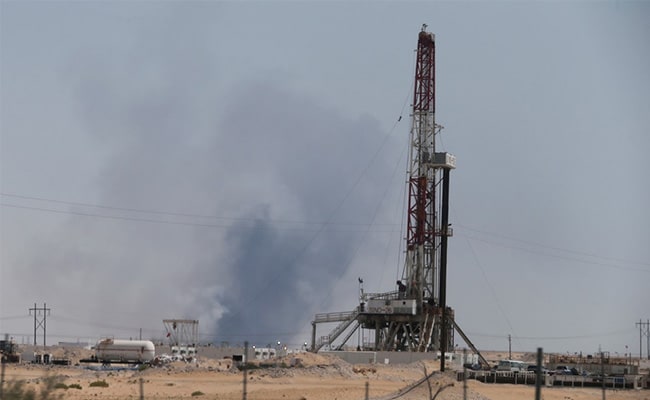 A predawn attack on the heart of Saudi Arabia's energy industry knocked out half of the country's oil production and raised the prospect of retaliation. The U.S., without providing evidence, blamed the strike by a swarm of armed drones on the kingdom's arch rival Iran. Iran has denied the allegation, but Yemen's Iran-backed Houthi rebels, who have been battling a Saudi-led coalition for more than four years, have claimed responsibility. What are Crown Prince Mohammed bin Salman's options and which is he likely to deploy?

1. Bigger Military Involvement in Yemen:
Saudi Arabia hasn't blamed anyone for the attack, but hours after the raid, Saudi fighter jets pounded Houthi militia positions in the northern Yemeni provinces of Saada and Al Jawf. While Saudi Arabia has been involved in a devastating war in Yemen since 2015, its campaign has been mostly limited to air strikes without a meaningful presence on the ground. That has hamstrung its intelligence- gathering abilities and reduced the effectiveness of its targeting.

"If the Houthis were actually responsible, this puts pressure on the Saudis to better target Houthi drone and missile capabilities," said Emily Hawthorne, Middle East and North Africa analyst at Texas-based advisory firm Stratfor Enterprises. That "might require a larger military commitment from Saudi Arabia at a time when it wants the opposite."

There has been speculation the facilities were struck by cruise missiles fired from Iraq, where a host of Iran-backed militants operate. In that case, Saudi Arabia would be expected to pressure Baghdad, "with what little leverage it has, to rein in the Iran-allied militias who could have been responsible," she added.

2. Cyber attacks and covert operations:
Covert operations and cyber warfare will be the most likely response in the short term, said Ryan Bohl, a Middle East analyst at Stratfor. But that isn't likely to be a game changer since the oil exporter's cyber weapons arsenal is limited, Bohl said. For a long time, the U.S. and Saudi Arabia have been actively trying to degrade Iranian security, intelligence and missile programs with no evidence such tactics have been effective at reducing the Islamic Republic's abilities, said Fawaz A. Gerges, professor of Middle Eastern politics at the London School of Economics.

Hawthorne said Saudi Arabia may deploy Israeli anti-drone technology such as the Rafael Drone Dome at its oil facilities and sensitive infrastructure. The two countries, still officially enemies, have drawn closer behind closed doors over a shared antipathy toward Iran, its nuclear and missile programs, and its efforts to extend its influence in the Middle East through militant proxy groups.

3. Talks
Negotiating a peace accord with the Shiite Houthi rebels remains the best long-term option for Prince Mohammed, whose objectives in launching the Yemen military campaign in 2015 seem increasingly out of reach. The Saudi-led coalition intervened to try to restore the internationally recognized government of President Abd Rabbuh Mansur Hadi after the Houthis captured the capital, Sana'a. Now, the war is splintering into smaller conflicts between the coalition's local allies as the Houthis improve their ability to target vital Saudi infrastructure.

Negotiations with the rebels could exploit differences between the Houthis and their Iranian benefactors, said Peter Salisbury, a consultant at International Crisis Group.

"Houthis are not a pure Iranian proxy and they still pursue an agenda rooted in the local," Salisbury said. "This isn't to say there is no Iranian influence but is to say that this is just one factor in the Houthi approach. Both the Houthis and Iran are working to achieve their own goals."

American officials are talking to the Houthis about ending the conflict, which has caused the world's greatest humanitarian crisis. The Trump administration has also been trying to cajole Saudi Arabia into negotiations with Houthi leaders, the Wall Street Journal reported.

A peace agreement acceptable to all regional parties could enable Saudi Arabia to withdraw from Yemen. Its main coalition partner, the United Arab Emirates, has already announced it's planning to draw down its troops.

4. Open Military conflict
While an open war between Saudi Arabia and Iran can never be ruled out, it's highly unlikely as the preferred avenue for retaliation. A military clash between the region's arch rivals could trigger a regional war, with Iran deploying its proxies in Lebanon, Syria, Iraq and Yemen, Stratfor's Bohl said.

Republican Senator Lindsey Graham said the U.S. should consider striking Iran's oil refineries if the regime continues its "provocations," but it's not clear President Donald Trump would go down that route. He's been hesitant to get dragged into additional Middle East conflicts.

The U.A.E., Saudi Arabia's main regional coalition partner, isn't likely to go along with such a response and would probably dissuade the kingdom from such a step, Bohl said. The U.A.E. shied from directly blaming Iran for the sabotage of oil tanker off its shores in Fujairah earlier this year.